Hen and chick plants are among the most common succulents grown as houseplants or outdoor plants.

When I was a beginner at growing plants, it was really disheartening to see my hen and chick plant dying as I chose this plant because I thought it was really hardy.

I want to share my experience with dying hen and chick plants with you so you can avoid my mistakes. First, the signs I noticed, then the reasons I discovered, and finally, how I saved my plant.

If you are wondering how this plant got its name, it’s because of the shoots that the succulent produces, or so-called chicks, which grow from the mother plant, or hen.

Before we move on, here is some basic info:

Read on to discover the reasons behind your hen and chick plant dying. 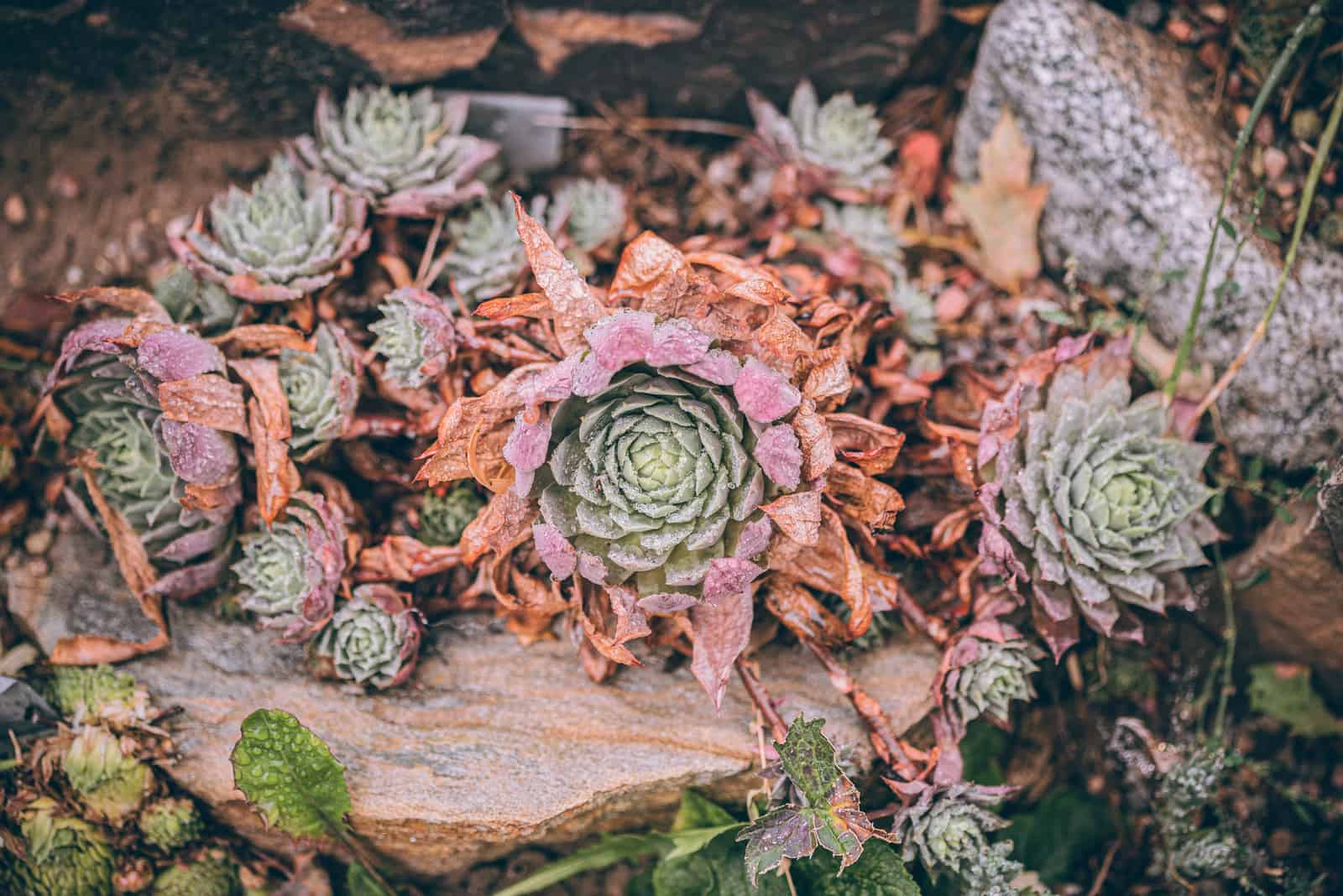 Experienced succulent growers already know the “nature” of these plants. It’s common knowledge that succulent plants grow in warmer environments, so if you don’t imitate these conditions, your plant will present different signs of dying.

There aren’t too many reasons your precious plant will die, and don’t worry, you will be well equipped to fix these problems in no time!

Let’s take a closer look at the signs and the reasons they occur!

This is a nightmare for every succulent grower. These plants are known for their beautiful leaves, and when they start to shrivel it can cause a lot of panic.

This plant appreciates warmer environments, so it’s expected that it doesn’t need much water.

The excess water will cause the leaves to become soft, mushy, and eventually shrivel. If the plant is constantly overwatered, the leaves will turn black and the plant will die.

Although the hen and chick plant doesn’t need much water, this doesn’t mean they shouldn’t be watered at all!

The longer you wait to water the plant, the higher the chance of it dying.

Underwatered hen and chicken plants first present wrinkled and shriveled leaves, and eventually the plant will become droopy and wilted.

The hen and chick plant is used to extended periods of exposure to full sun.

If the plant doesn’t receive enough sunlight, the rosettes will open up and grow to reach light sources.

As a result, the leaves will shrivel and point downwards.

Brown Leaves Due To Underwatering 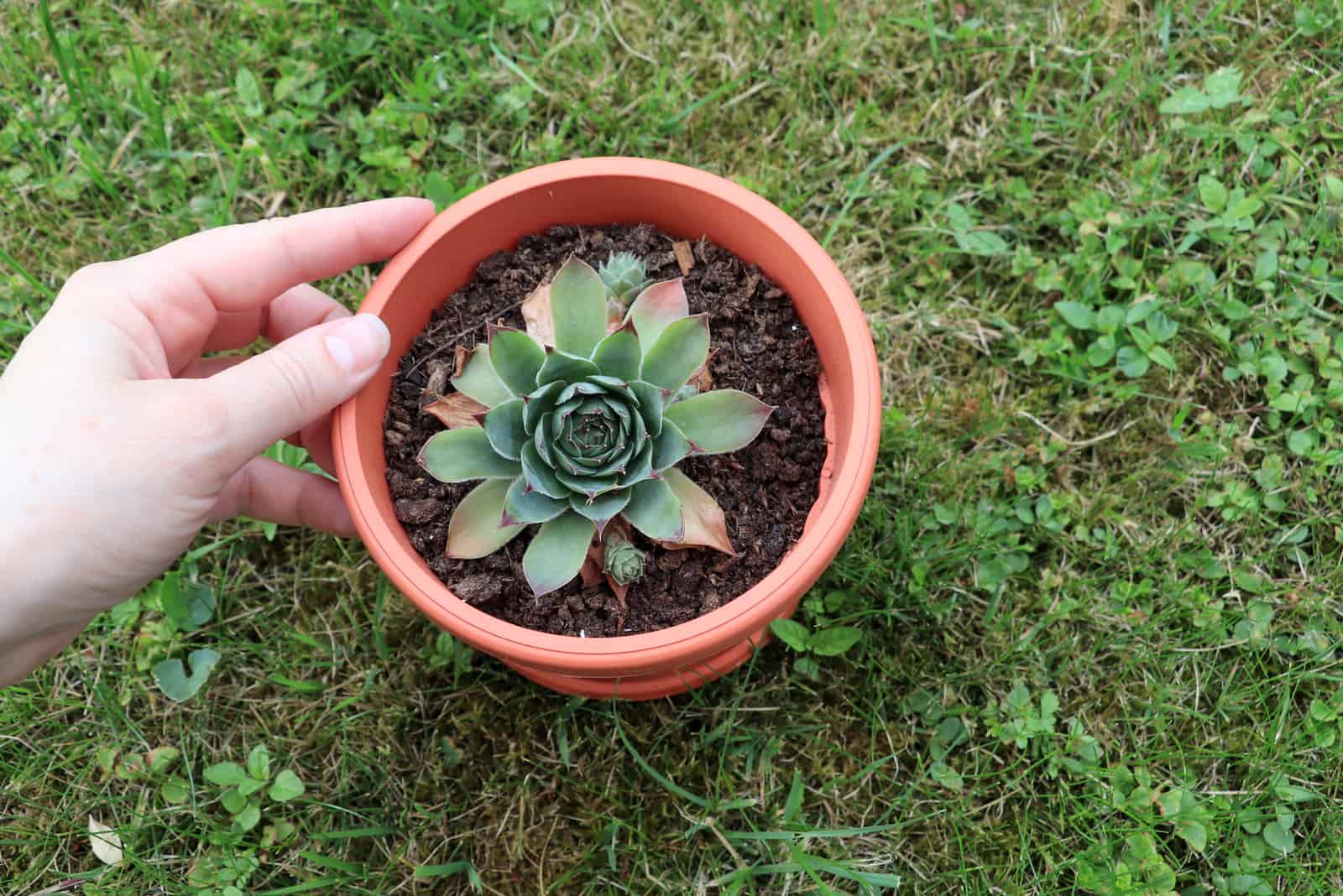 If a hen and chick plant doesn’t receive any water for an extended period, there will be plenty of dead leaves that dry up and eventually turn brown.

Overwatering will cause the hen and chick plants soil to be too wet, rendering them more susceptible to diseases caused by pathogens.

One of the most common pathogens is fungus, which decomposes the root tissue. Excess water will be consumed by the fungus, which causes root rot.

The best way to check if a plant is suffering from root rot is to take it out of the pot and see if the soil is mushy and smells unpleasant. If it is, you’ve overwatered your succulent plant.

Hen And Chick Plant Dying Due To Its Nature

I’m sure that it’s tough for succulent growers to hear that their hen and chick plants will eventually die, and that ”forever alive” in this case actually refers to the multiplication process.

These succulent plants have a life cycle of three years.

Hen and chicks plants are monocarpic, which means that when the offsets grow to adult size, both the flower and the hen die.

The plant will bloom when it is about three years old, though it can also prematurely bloom due to poor conditions.

With monocarpic plants, the flowers remain in bloom for several weeks and then die, and the main plant dies afterward.

Solutions For A Dying Hen And Chick Plant

If you are growing this succulent for the first time, the best way to avoid any complications is by paying close attention to it..

However, if problems do occur, here’s what you can do!

In the natural habitat of hen and chicks plants, heavy rain is often followed by extended periods of sunshine.

You should wait a while to water this plant. The watering schedule only changes during extremely hot summer days, and just a little water will be enough for the plant.

The soil must be completely dry before watering, and new plants should be well watered. After they are established and have received enough water, reduce watering to prevent your hen and chick plants dying.

If you have concluded that your plant is dying due to overwatering, it’s time to change the potting soil.

You should choose well-draining soil.

To improve the quality of the potting soil, you can add mulch or fine gravel.

When grown as an indoor plant, similarly to Echeveria flower, the hen and chick plant needs to be placed in a room where the temperature ranges from 65 to 75 degrees Fahrenheit.

Don’t worry if the temperature drops. This is a hardy succulent and it can survive even cold winters. 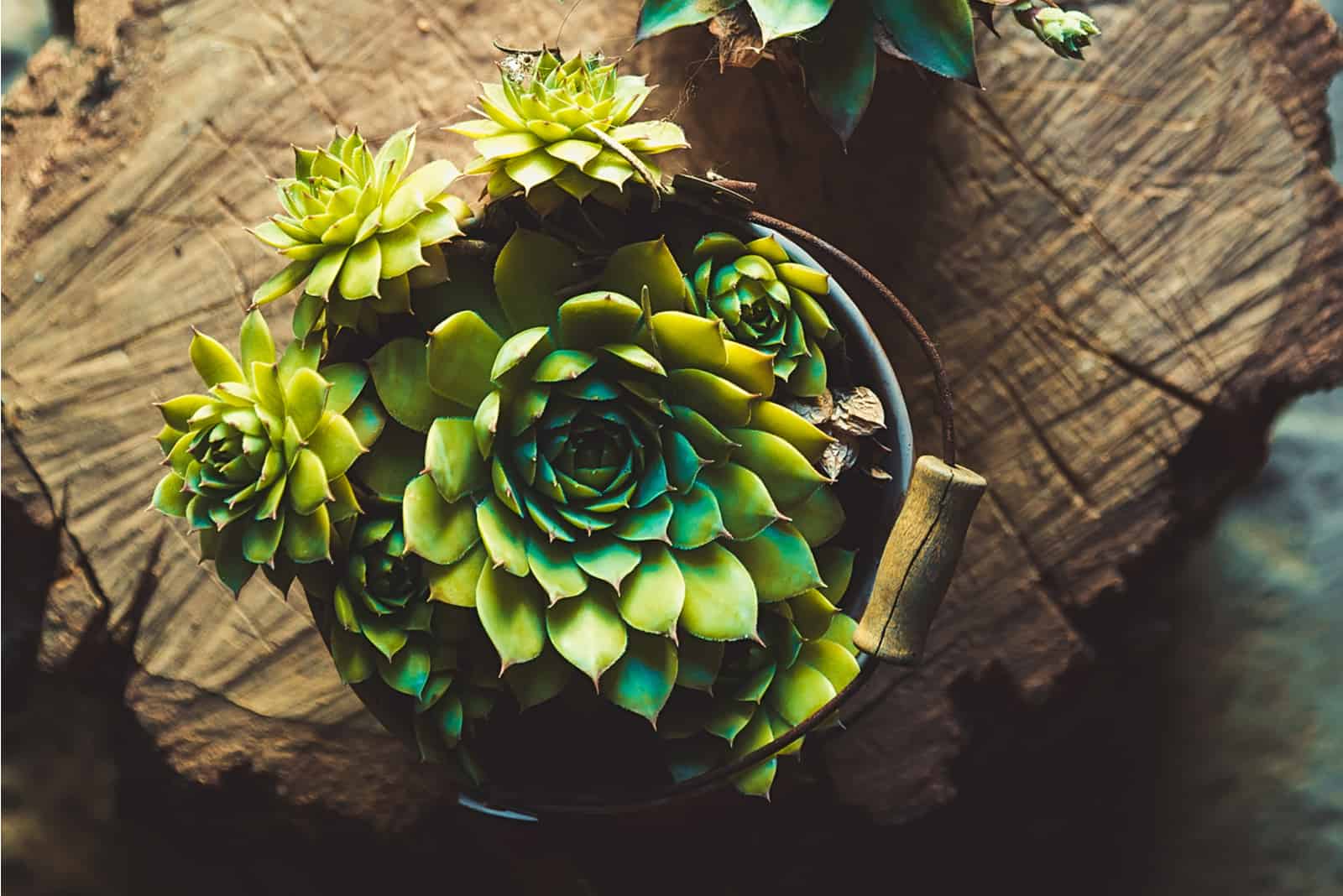 The hen and chick plant, like the Sedum, loves direct sun exposure.

If grown indoors, place it near a window so it gets enough light.

You can also use grow lights if you don’t have a window that faces direct sunlight.

How To Remove Each Dead Leaf

If you want to bring back the original freshness and glory of this plant and help it breathe, you should remove each dead leaf.

Gently pull off each dead leaf using your fingers. In this way, you will not uproot the hen and chick plant and cause even more damage.

How To Remove Root Rot in 5 steps

You can save your hen and chick plants from dying due to root rot, here’s how:

1. Take the plant out of the pot. This will help you see any changes in the root system.

2. Prepare your pruners and sterilize them. This will prevent damage to other plant parts due to root rot. If the roots are affected by pathogens such as fungi, you should use a fungicide.

4. After removing the affected roots, wash the other roots thoroughly to avoid temperature shock and let the roots and the soil dry.

5. The next step is repotting.

After repotting, stick to your usual care routine.

Propagation Of Succulent Hen And Chick

Succulents are very easy to care for, and also to propagate.

This is probably the best thing to do if you notice your hen and chick plants dying.

It is easily propagated as it produces a lot of chicks (offspring). You can chop them off the plant and replant them. 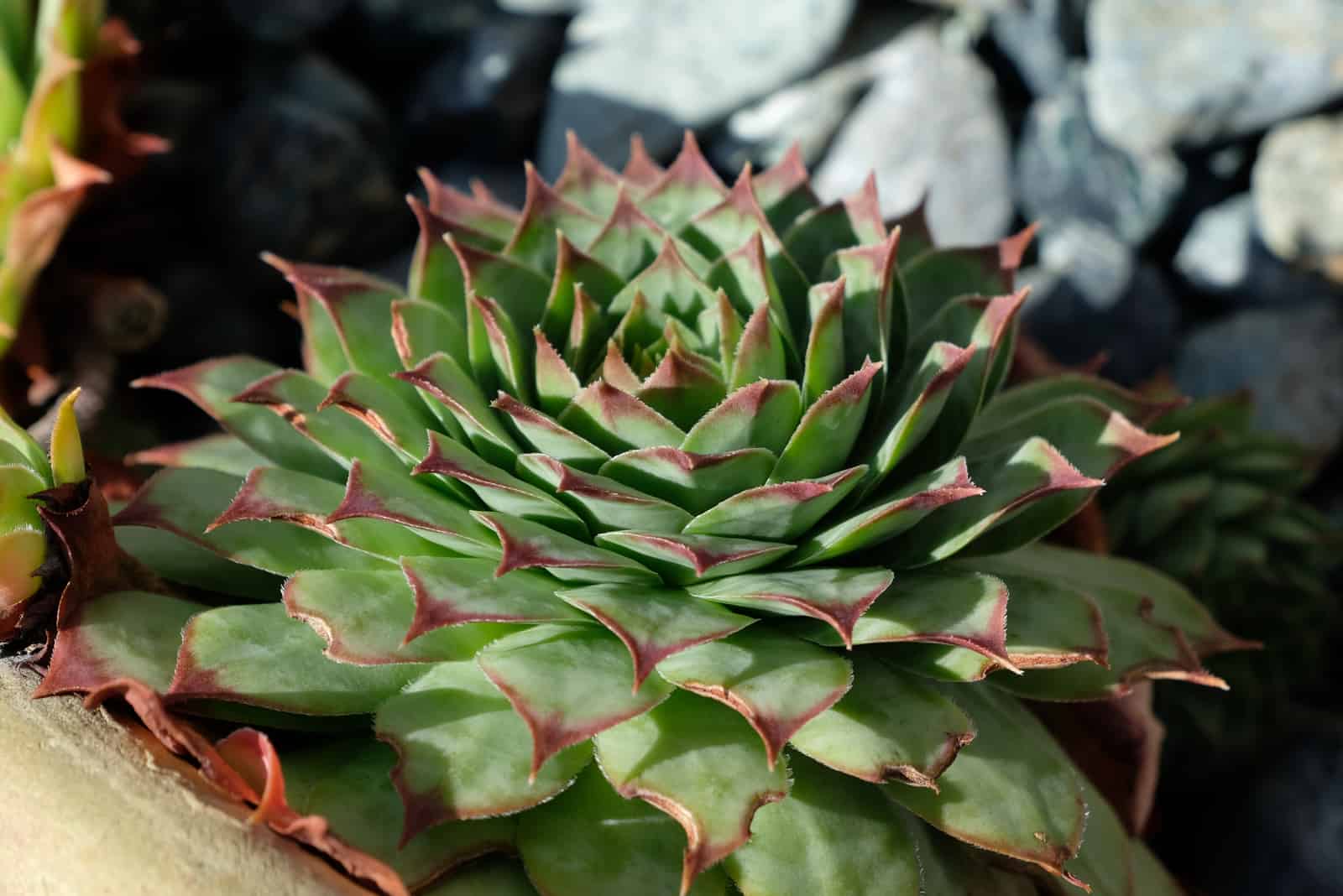 Succulents come in different varieties, and they are easy to care for and propagate.

Don’t panic if you notice your hen and chick plants dying.

If you spot the signs, try to determine the reason and apply one of our solutions.

Your plant will be back to thriving in no time (if its life cycle doesn’t end). 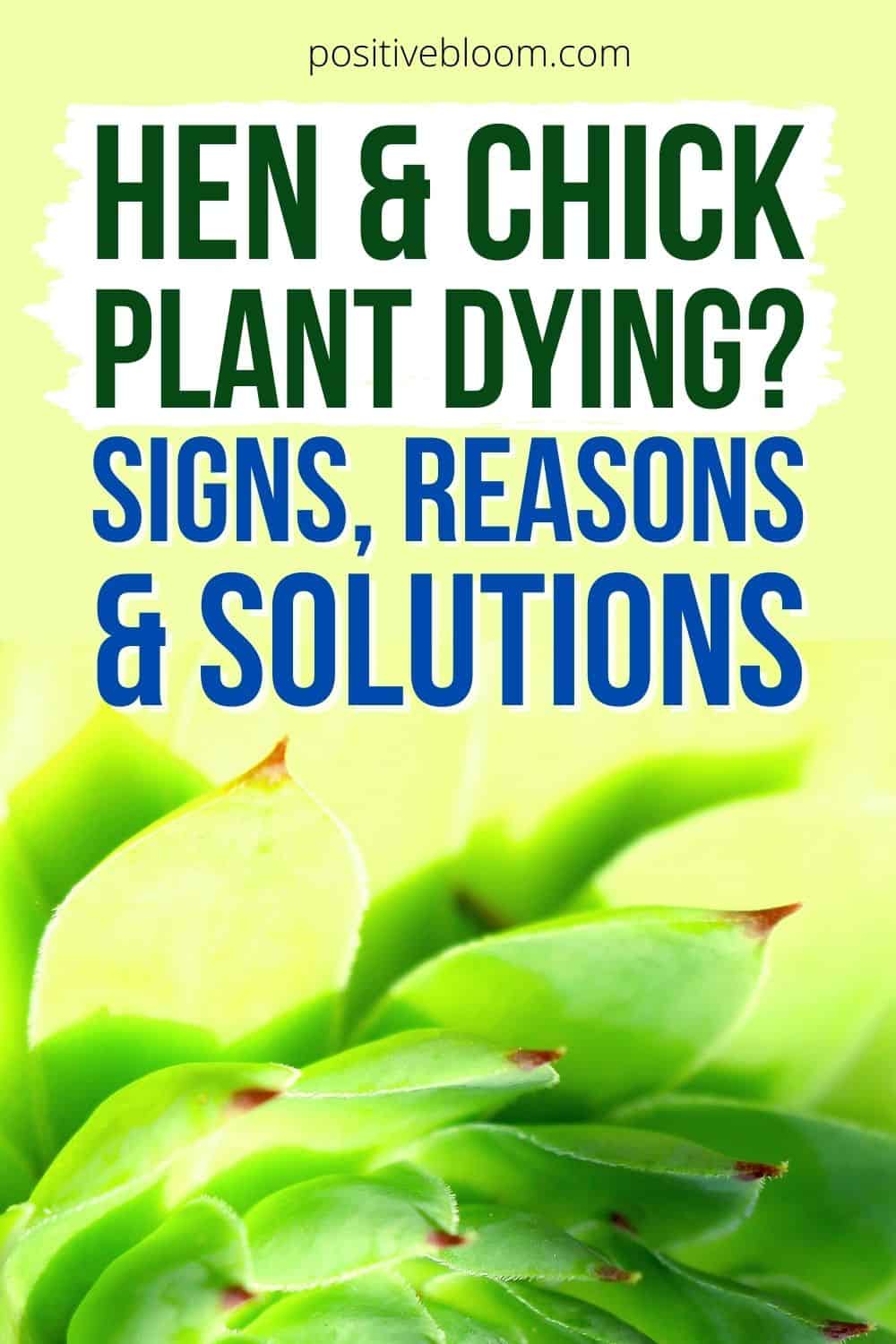 Why Is My Succulent Dying? 9 Helpful Reasons And Solutions

[…] and the leaves at the base of the plant might start dying. (One of the most common reasons for the hen and chick plant dying is inadequate […]