I love eating watermelons in the summer, but I had no idea there was a difference between a male and female watermelon! I was so intrigued by the idea that I decided to put together this article about all the differences and features of this delicious fruit.

So, if you want to learn more about watermelons, read on to learn some interesting facts about this fascinating food!

But, as always, basic information:

Now that you know some general specifics about watermelons, let’s look a little deeper.

In the following article, you will learn so much about watermelons that you’ll almost certainly be inspired to grow some of your own!

You probably like watermelon for its fruit, not for its flowers, but if you want to grow some of these sweet summer fruit all by yourself you will have to learn a thing or two about its flowers.

The only thing I’ll say for now, is that you need to combine the pollen from the male flower with the female flower for the magic to happen.

The first important thing you need to know about watermelons is that they are monoecious, which means that they have both male and female flowers on a single plant. 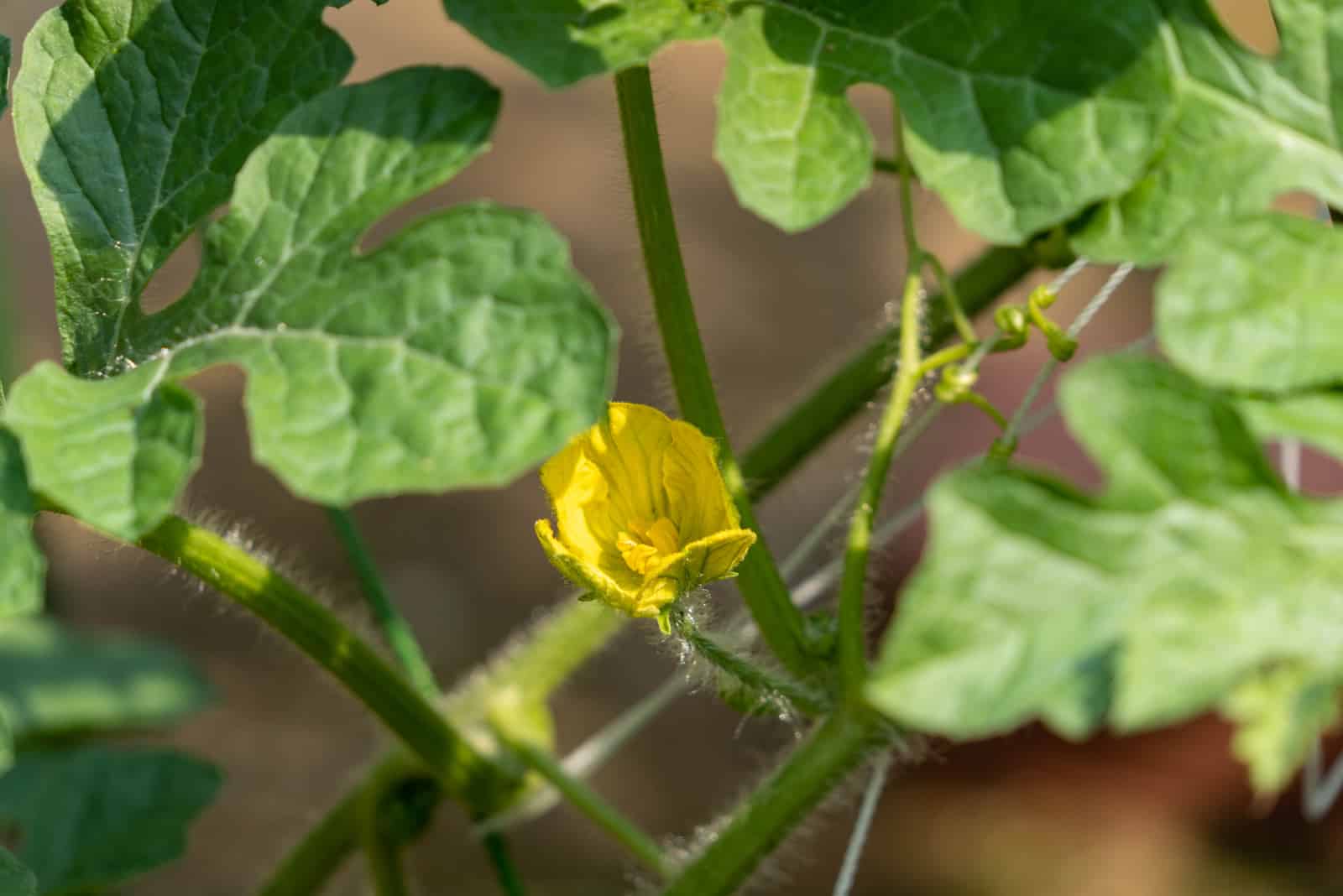 The male flowers usually first appear when the time of blooming approaches.

The main feature that distinguishes the male flower from the female one, is that the male bloom has anthers.

Furthermore, the male flower is male because it only has male structures, including the anther and the filament, which is where you can find pollen. 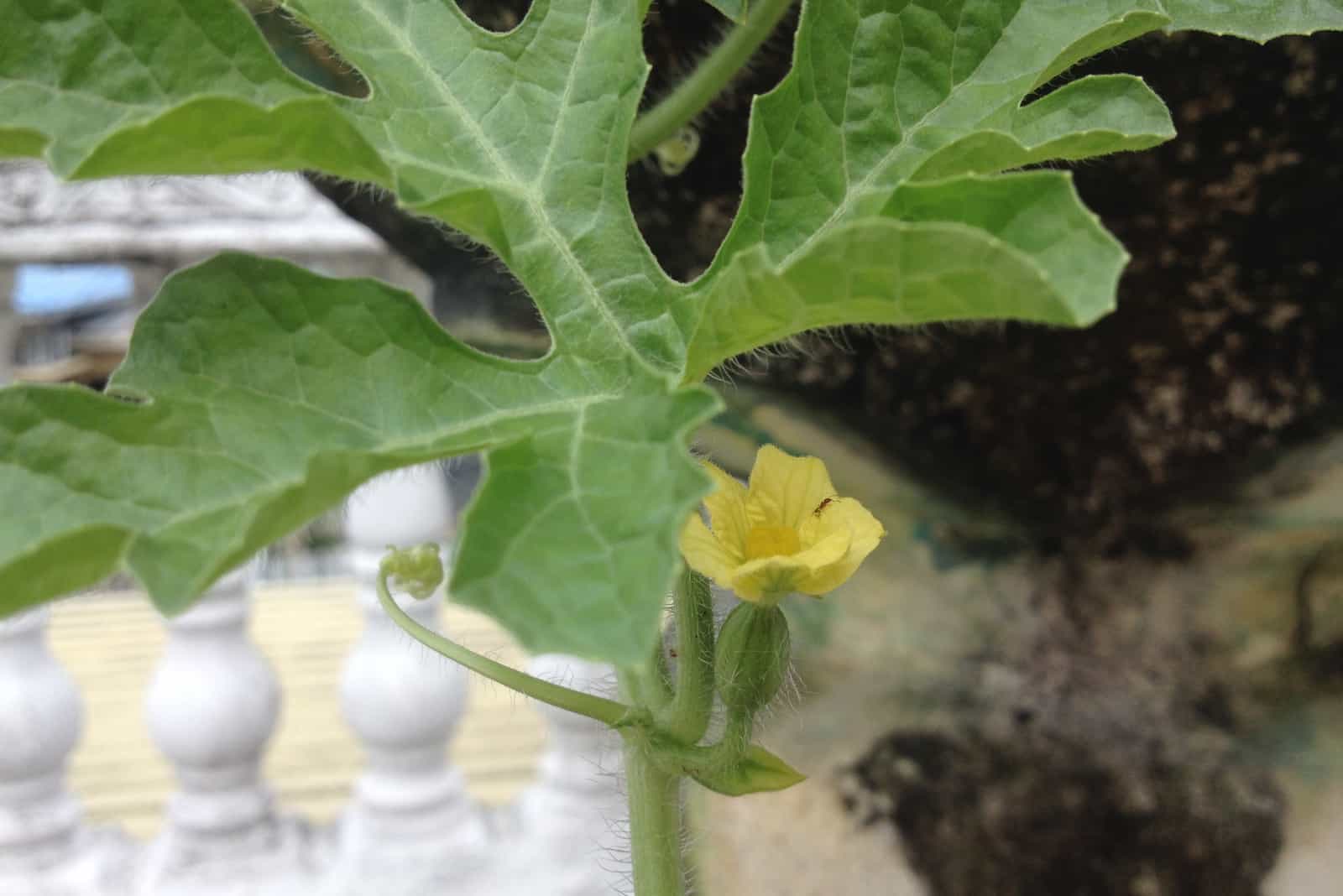 Female flowers, on the other hand, contain only female parts, or more precisely an ovary, to which three stigmas are attached. This ovary later becomes fruit if the female flower is pollinated.

It is important to have a hive of bees nearby when watermelons are flowering so that bees can spread the pollen from the male to the female flower.

A pro-tip for all of the beginner watermelon growers out there, is to make sure that there are no other scented flowers around your watermelons so that the bees give all their attention to this dessert fruit.

Pollination is the process by which pollen is transferred from the male flower to the female flower, specifically to the ovary. In order to set fruit, watermelons have to be pollinated.

Watermelons are self-pollinating, which means that one plant is enough for the reproduction to take place, and this is because it is monoecious, i.e. it has both male and female flowers.

We’re talking about pollination and spreading pollen from one flower to another, so it’s worth mentioning that wasps and honey bees are not so terrible at it. However, other larger insects are even better for pollination because they can spread more pollen.

You should keep in mind that the more pollen there is on the plant, the better and more likely pollination is to occur. However, when it comes to seedless varieties, pollination is somewhat harder.

Seedless watermelons have sterile pollen. That is why pollinizers (plants that provide pollen) should be planted near seedless varieties of watermelon plants. (Read on to learn more about these.)

Pollen is crucial for seedless hybrids, and they need a lot of it to produce watermelon fruit.

Hopefully you have been inspired to grow your own small garden of watermelons, so you’ll also want your watermelon to be as big and healthy as possible.

How To Avoid Cross-pollination

Cross-pollination is a type of pollination in which the flower of one plant is pollinated by the pollen of another.

To prevent cross-pollination, you normally need to keep the different varieties of plants at least 100 yards (90 meters) apart. This simply isn’t possible in a home garden, but there are some tips that may help you avoid this issue.

Instead of just separating them, you can select a female flower you want to pollinate and then find another male flower to use for pollination (of course, these should be of the same variety and species).

You can use a paint brush or something similar to collect the pollen from the male flower and transfer it onto the female flower.

After you have done this, you should keep the flower shut so that it doesn’t get contaminated. If the flower is small, you can just place a bag over it (but not a plastic bag, because plastic bags accumulate heat and that can destroy the new seed). If the flower is a bit larger, however, you can use a string and tie it shut.

This kind of pollination is known as hand pollination, and although it can be quite complicated and time consuming, the results will be worth it in the end.

You can also check this video that will give you courage and all the boost you need; you’ll see you’re doing nothing wrong.

Pollination happens within just a few morning hours. This is good to know if you practice hand-pollination, and it works either because of the lack of insects or because of close proximity to other varieties and species on the field or in the garden.

If the weather is hot, the flowers close and bees and other insects cannot get to the stigma, which means pollination cannot happen. And if the morning is unusually hot, you may only have a few minutes to pollinate your watermelon. 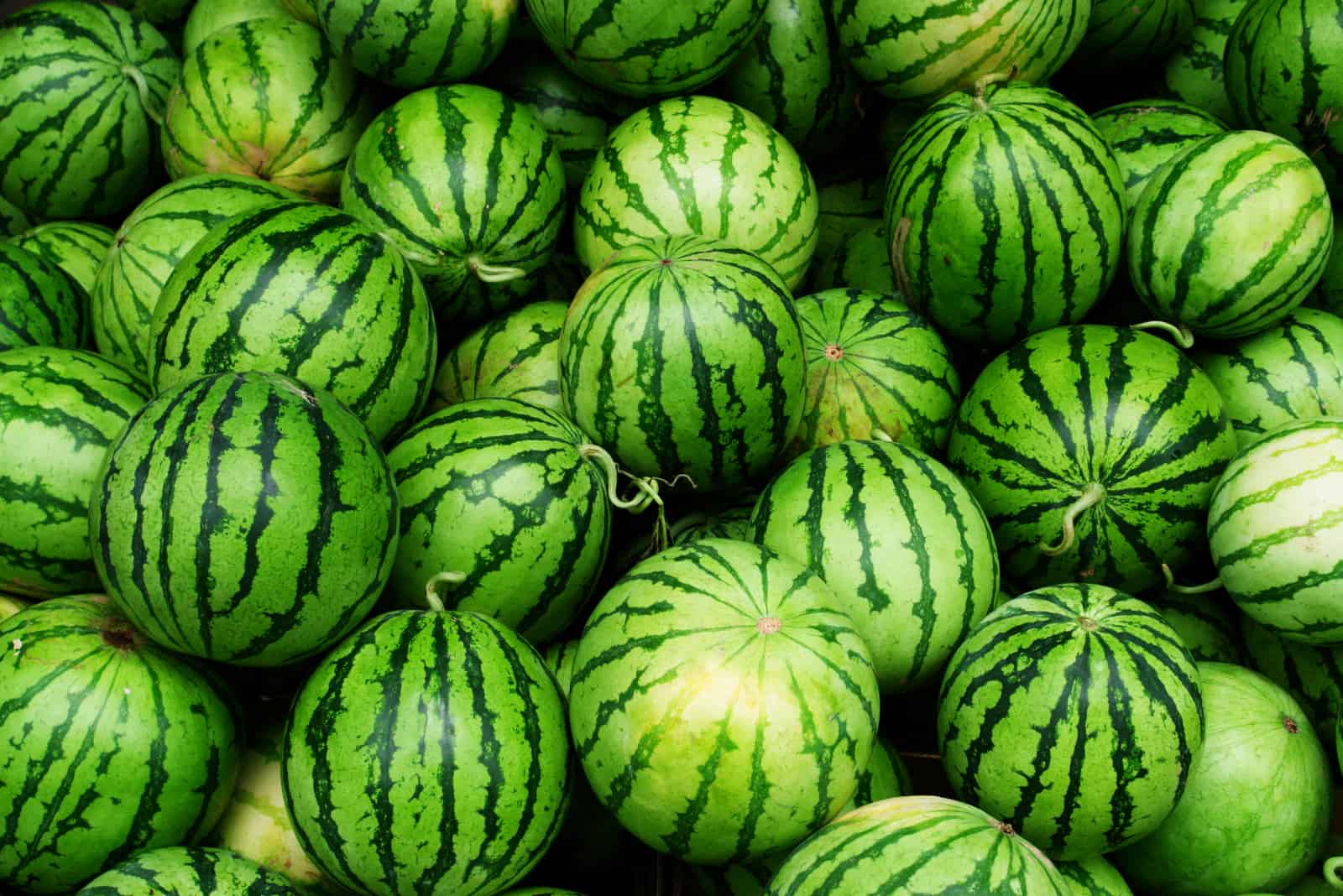 We will also discuss how you can enrich the taste of your watermelons, what affects them, and also what other varieties of watermelons we haven’t so far discussed.

Some home grown watermelons end up small and flavorless, and this could be for several reasons, including the climate.

The following factors also affect the sweetness of melons:

• Temperature (climate) – drastic changes in temperature will affect the sweetness of watermelons, and this fruit loves warmer climates. A good tip is to turn this fruit over every day so that all its sides get exposed to the sun. This will help increase the sweetness and flavor.

How To Tell If A Watermelon Is Ripe And Sweet

There are many ways to tell whether or not you’re buying a ripe watermelon. Some like to knock on it, and if it makes a hollow sound it means that it’s ripe and sweet.

However, if you’re like me and all watermelons sound the same to you, you can always try and carefully look for the following indicators of ripeness and sweetness:

• Yellow field spot – this part of the rind indicates that the watermelon sat on the ground and was ripe before picking.

• Webbing – webbings are believed to be caused by the bees that have pollinated the watermelon, and more webbing indicates that the fruit is sweeter.

• You should look for a watermelon that is dark and has no dents.

• Don’t look for the biggest watermelon, because it probably isn’t so sweet. You can also recognise these by their oblong shape. Look for a more rounded watermelon and you shouldn’t have any problems.

• Seedless varieties are not as sweet as other varieties.

• Yellow watermelons are said to be sweeter than red ones. 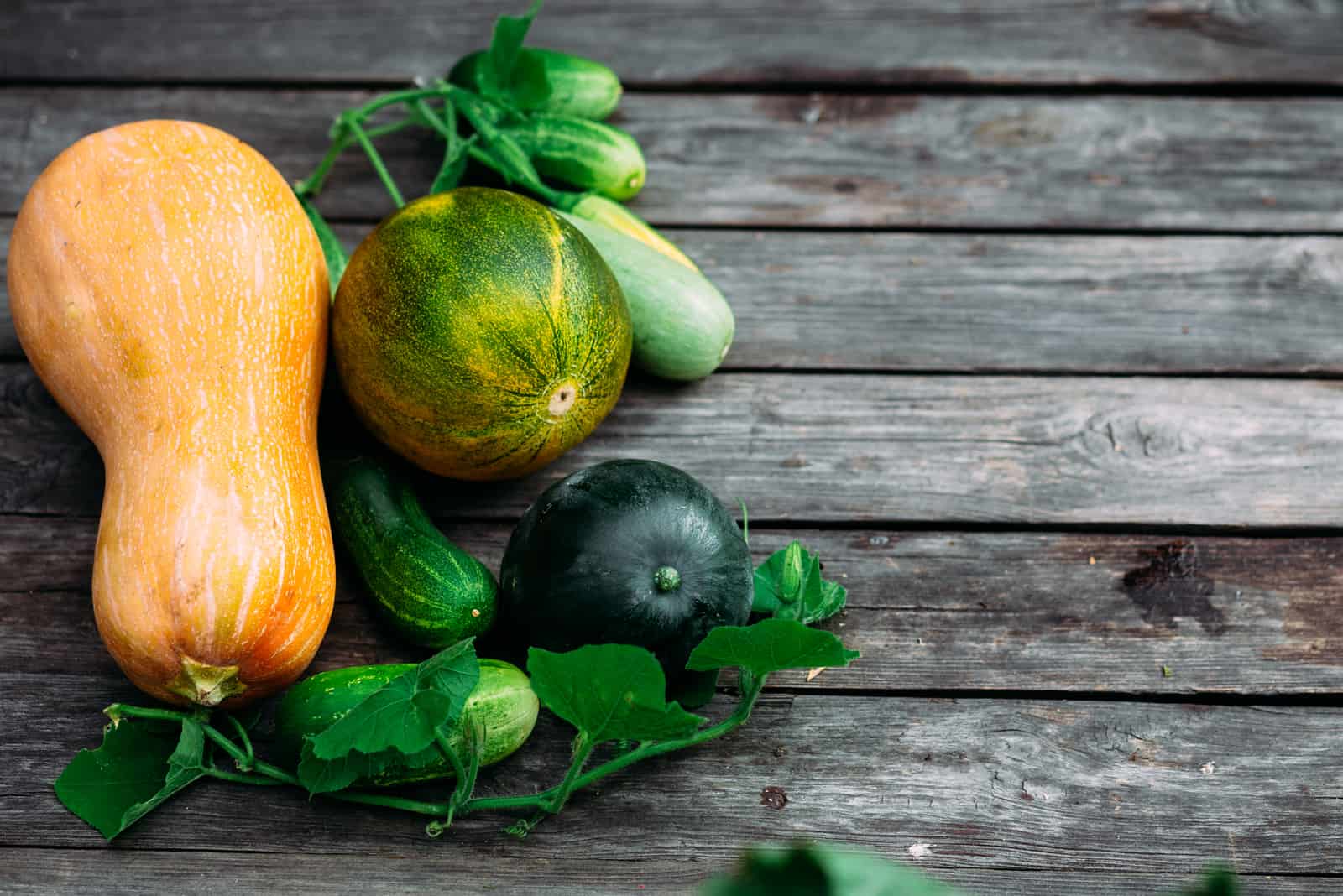 Watermelons belong to the Cucurbitaceae family, also known as cucurbits. Other plants that belong to this family include pumpkins, cucumbers, squash, etc.

There are many different varieties of watermelons, but the most common are seedless and seeded watermelons, and yellow-orange and mini watermelons.

Watermelon seeds are quite a nuisance, so seedless watermelons were crossed, however these are actually not as sweet as seeded watermelons.

Seedless watermelons were made using triploid varieties, and they are the result of crossing a normal diploid parent with a tetraploid one. However, this isn’t cheap.

They have three sets of chromosomes, which makes this variety sterile.

For Those Who Want To Know More

There is an amazing fact about watermelons I can almost guarantee you didn’t know.

Watermelons contain lycopene, which is an antioxidant that not only increases the taste of a watermelon, but that may also give you a helping hand with sun protection.

You may also be interested to know that yellow watermelon cultivation started before the red and pink varieties.

And finally, watermelons have many health benefits: they keep your eyes and heart healthy, protect from all sorts of joint inflammations, and more. 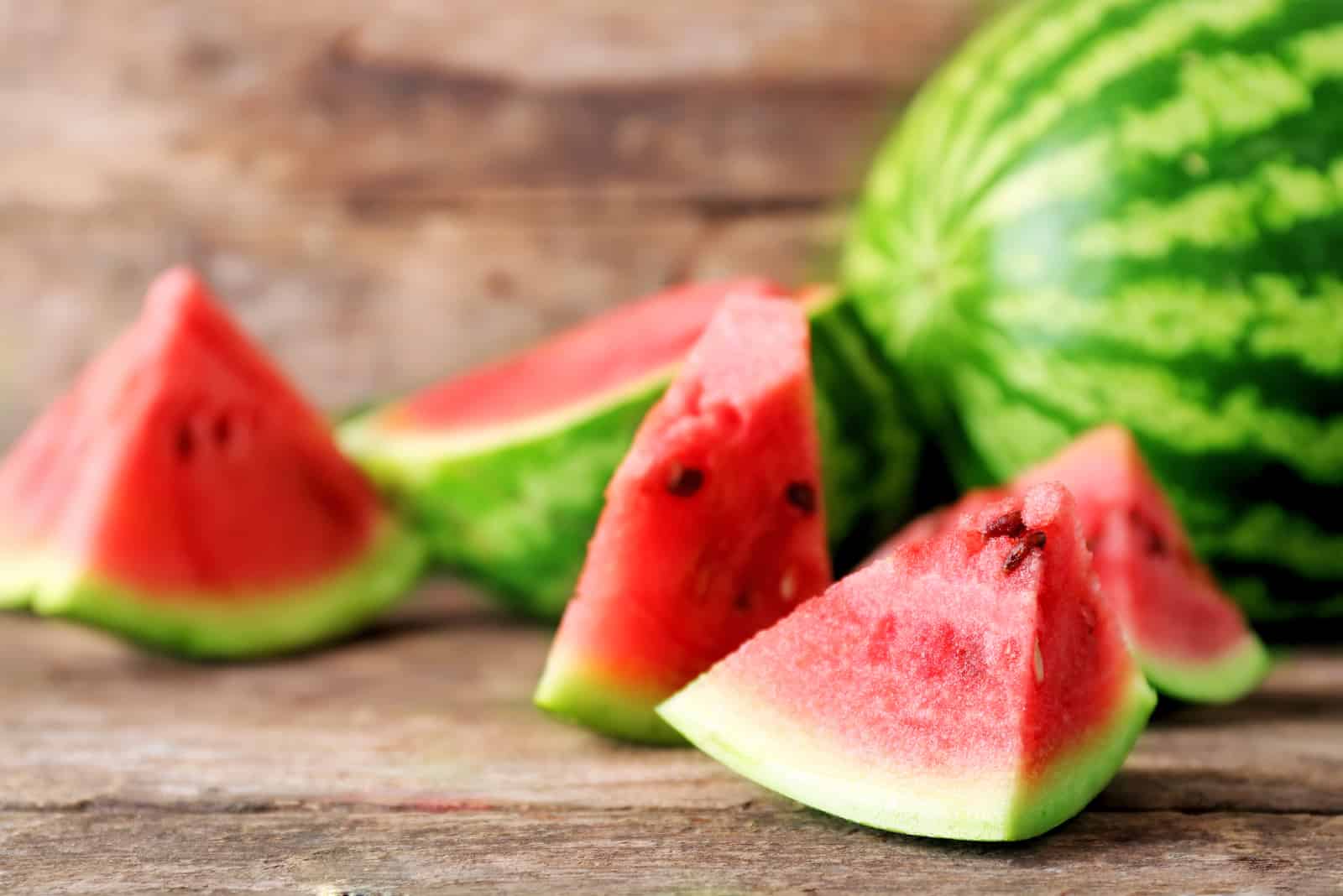 Now that you are armed with all kinds of information about watermelons, it is time to learn the answers to the most frequently asked questions.

Which watermelon is sweeter, male or female?

How many seeds are in a male watermelon?

There are more seeds than anyone wants to count, so we will just say that there are a lot!

However, there are no male watermelons per se, so all seeded varieties have many seeds. If you find these a chore, you can always try seedless watermelons and avoid having to spit them out.

What color is a male watermelon?

Some varieties are red or pink,while others are yellow.

It is good to know that there aren’t actually male and female watermelons, so their gender does not affect their color. It is the variety that determines what color a watermelon will be – red or yellow.

​If you want a sweet watermelon, look for the telltale signs of sweetness: plenty of webbings, a round shape, and a yellow field spot. 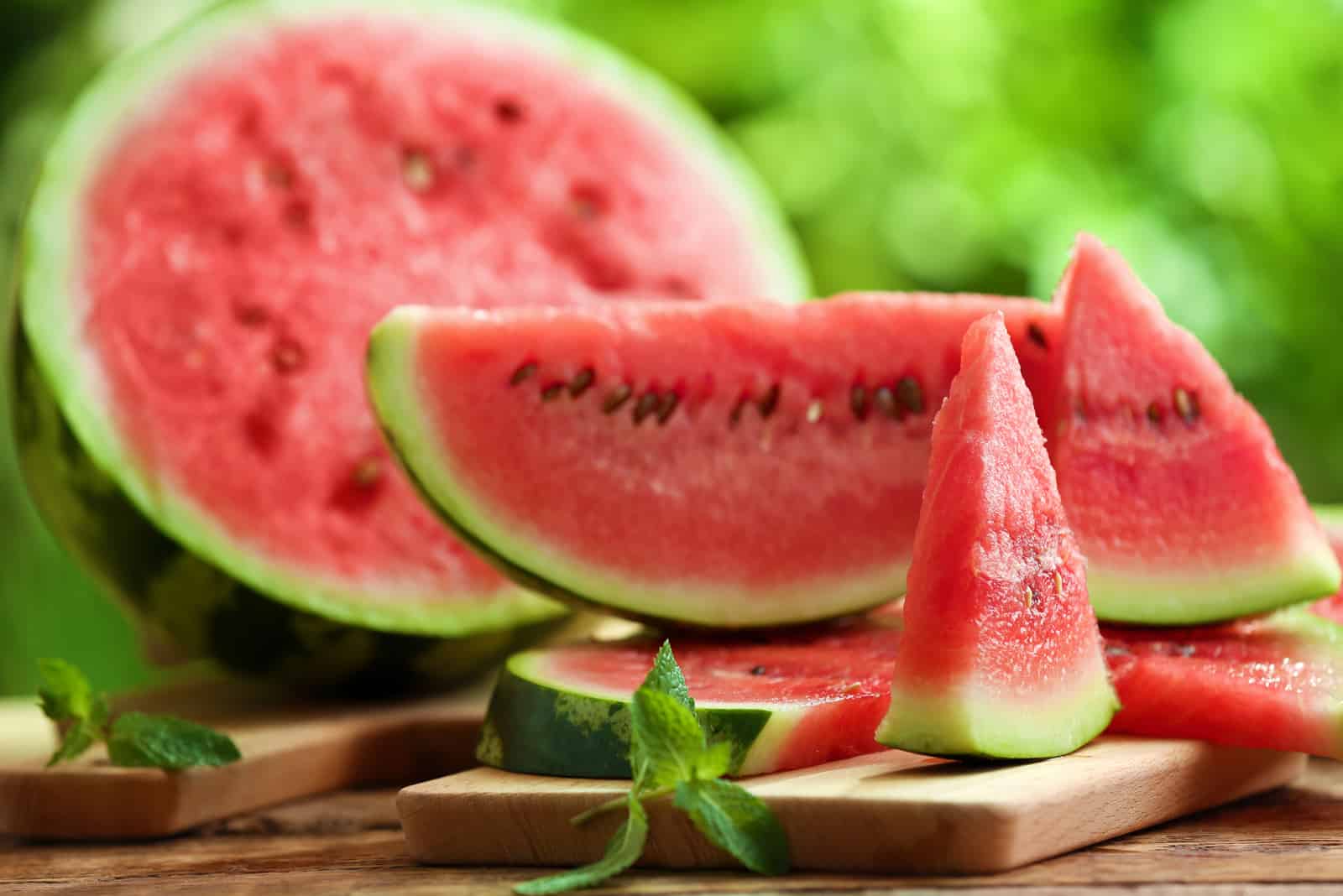 I had no idea there were no male and female watermelons, but the most important thing is that the fruit you eat is sweet and delicious, so it doesn’t really matter.

Watermelons are still very popular, no matter the gender.

If you ever decide to begin watermelon production, we hope these tips help you! 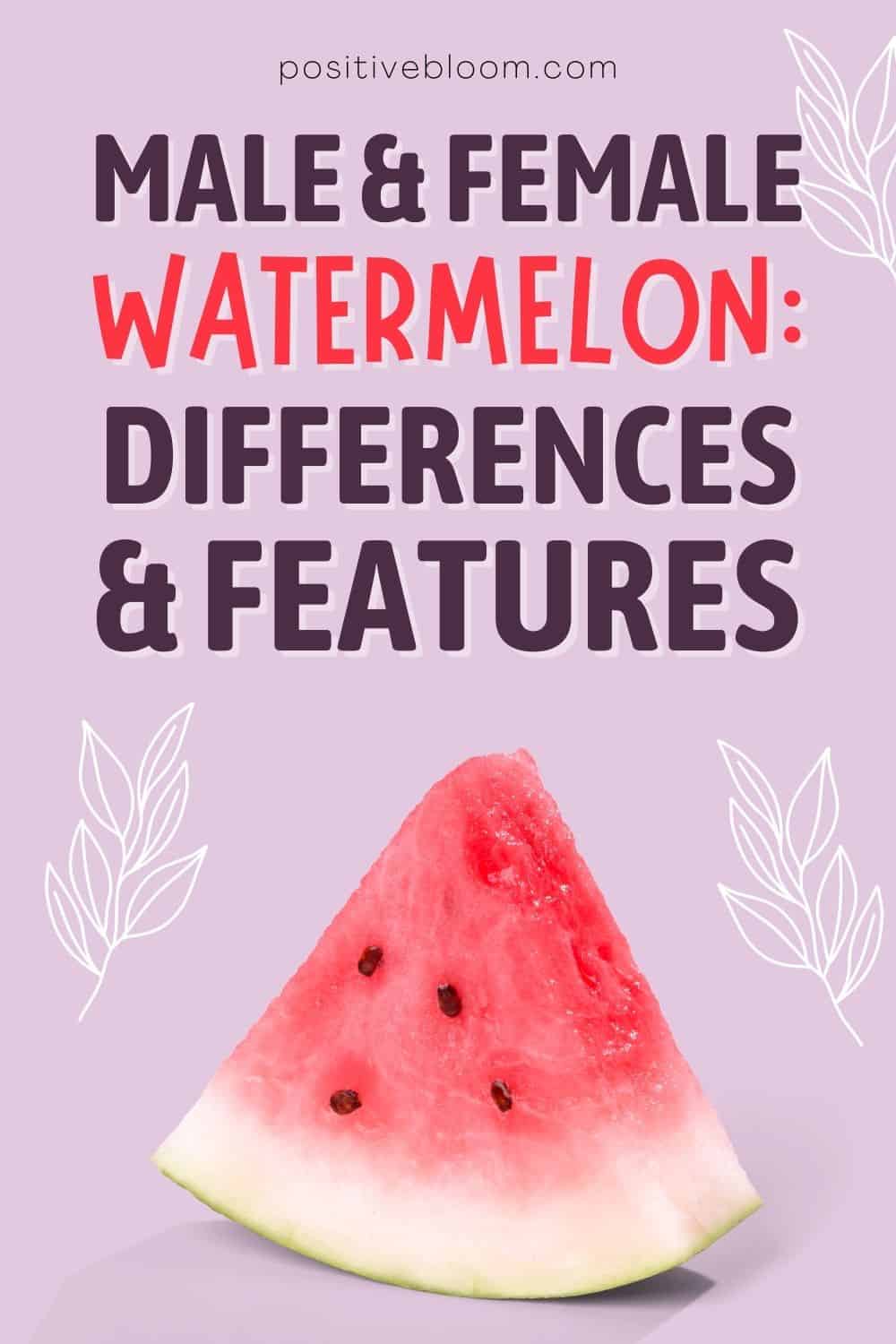