Latin words are often very confusing, but it gets easier once you learn the root words, prefixes, and suffixes. Well, for some!

Today I’ll help you resolve the confusion about terrarium vs vivarium. As you can see, both words have the term ‘arium’, which translates to “container”.

The story doesn’t end there. There are many other words with the same suffix, so we’ll learn the difference between the terrarium and vivarium, as well as some other types of ariums and their features.

But don’t let the Latin scare you; it will all make sense by the time you finish this article! 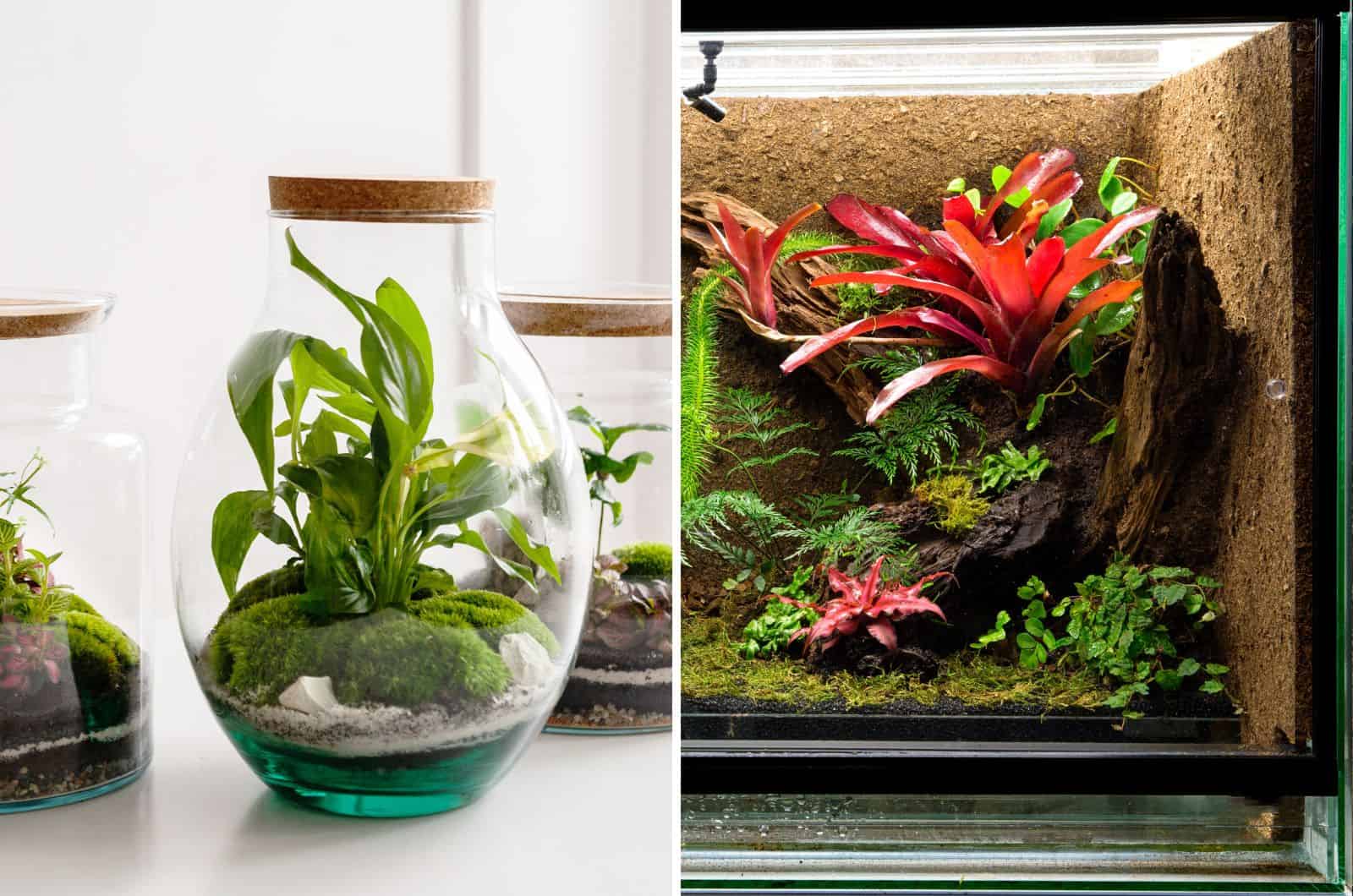 Terrariums and vivariums are both used in gardening.

It may be pretty tricky to understand why these containers don’t have the same name, so we’ll first look at the purposes of each, and then clarify the confusion.

Terrariums are more or less the opposite of aquariums. The best way to understand this is by looking at the root words, aqua, which means water, and terra, which means land or earth.

It stands to reason that a terrarium would be an enclosure entirely made of “land”. A terrarium usually contains plants and land.

However, you may come across an animal terrarium, which is occasionally used to describe animal enclosures. This is incorrect, though in this case, the better term would be “vivarium”.

Terrariums are containers designed to grow houseplants and create a miniature ecosystem with water cycling, photosynthesis, and respiration processes.

If you want to grow succulents and similar smaller plants, or have already grown some, they’ll thrive in terrariums.

These “ariums” are typically set up in a type of clear glass container, so they are also known as glass terrariums.

The bottom parts of these glass containers, commonly known as terrarium bases, should contain materials such as stones or pebbles. These materials ensure that extra water doesn’t stay in the soil.

Of course, you’ll need to use soil, just remember that some plant species require a specific potting mix.

There are two types of these “ariums”, open and closed terrariums. You don’t need to cover the container with a lid if you grow certain plant species.

For example, sensitive plants such as cacti and succulents prefer open glass containers.

A closed terrarium offers a special setting for plant development that functions by trapping the oxygen in order to enable continuous moisture circulation.

Additionally, the walls of these terrariums are translucent, which means they allow heat and light to pass through and reach the plants.

You can often find these enclosures as decorative elements in households.

Simply put, this kind of “arium” is often a container for little indoor plants.

If any animal is present in the container, rather than only plants, it is no longer a terrarium.

It has become a Vivarium! Again, we’ll first observe the root word, which is vivere, the Latin word for life or lively.

For instance, a succulent, some soil, and a gecko all in the container is the perfect example of a vivarium.

The type of environment in the vivarium doesn’t always need to resemble a forest. You can create a desert-themed environment and get an animal such as a lizard.

The essential thing is to always keep these containers open because living animals need air to breathe, and you’ll need to add water and nutrient content.

The term vivarium is pretty broad because living things can be almost anything. They are typically closed-off areas designed to offer a comfortable habitat for animals and plants to be watched or studied.

I’ll tell you more about other types of “ariums” later. Still, it’s interesting to know that the majority of them are considered to be types of vivariums, and that’s where the confusion begins…

We’ve learned about the general characteristics of the vivarium and terrarium, and we’ll now look at the differences between them.

Let’s first discuss the natural environment and environmental processes. Terrariums are typically plant habitats enclosed in a container to take care of themselves.

On the other hand, vivariums need ‘help’ in creating the ideal environment for animals. For example, animals need a constant water supply, so you’ll need to provide filters and pumps.

These two also have distinct constructions. You’ll need to ensure additional elements if you are constructing a vivarium, for example, ventilation.

Containers also need distinct environments. If you want to raise snakes in containers as opposed to tropical plants or moss, you’ll need appropriate feeding, humidity levels, watering routines, and lighting conditions. I mean, there’s a huge difference between animals and plants! Mist the plants if they like more humidity!

You can’t grow certain plant species, such as bromeliads, in closed terrariums because they might have trouble with the poor air circulation. There are also some species you can’t grow in a vivarium, for example, toxic Monsteras may harm a gecko.

Some animals, such as bearded dragons, are used to warmer temperatures, while certain plants can’t survive in such conditions.

Now that you know the difference between vivariums and terrariums, you also need to know a few more container types, each with their own purposes.

The thing is that terrariums and vivariums could be the only types of enclosures. Humans like to be precise, however, so they’ve named a few more types.

Let’s get into details! 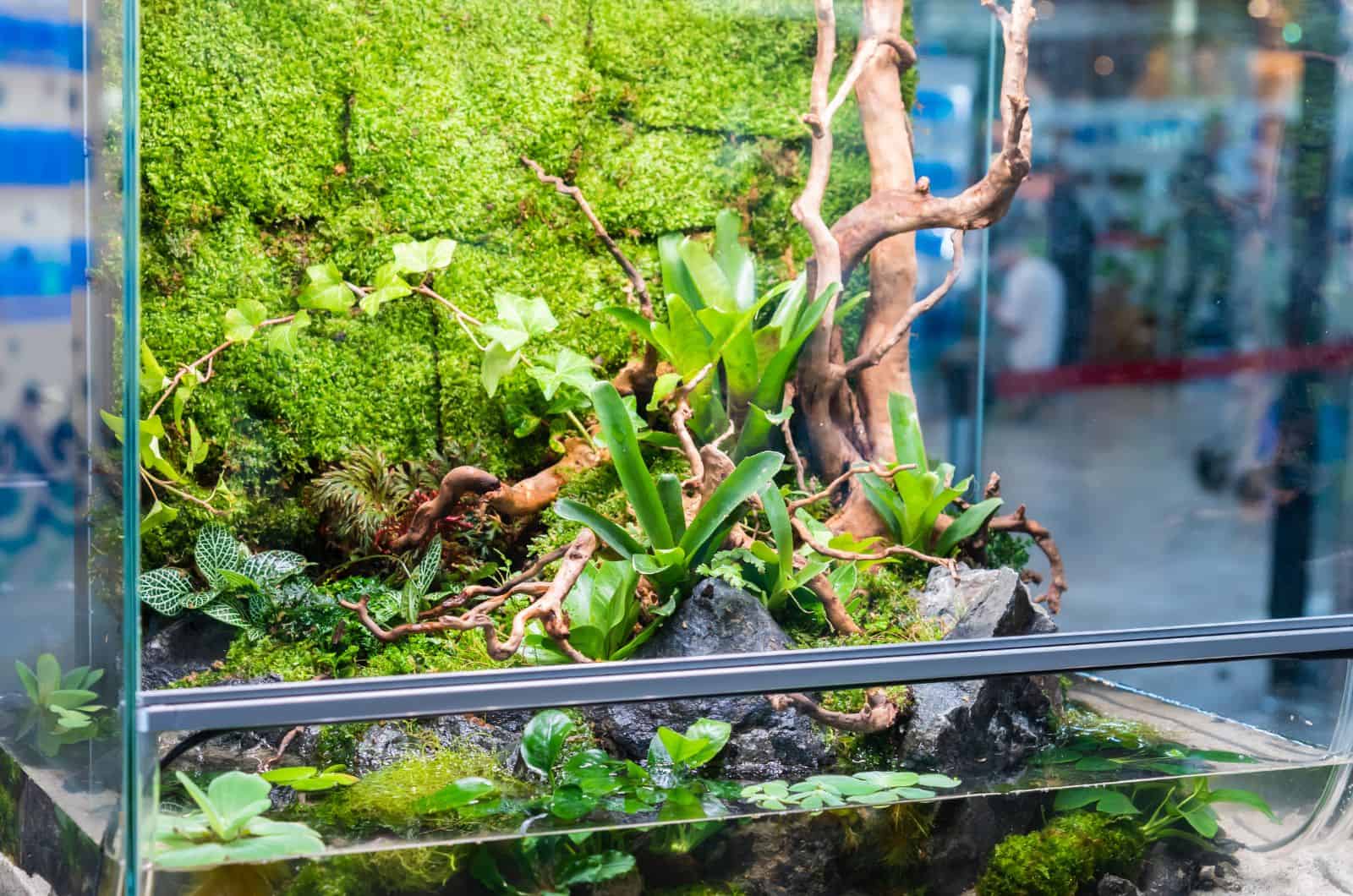 Paludariums are becoming more and more popular lately, and for good reason. They incorporate elements of other ariums, which makes them perfect for different plants and animals.

The root word here is palus, which translates to the swamp. Therefore, this type of container includes some sort of primary water feature.

The best thing about these types of enclosures is that there is an almost limitless variety of plants and animals you can keep in them.

Paludariums are very common ariums found everywhere. Those containers with aquatic-like bottoms and fascinating backgrounds decorated with moss or other small plants; well, they are paludariums! 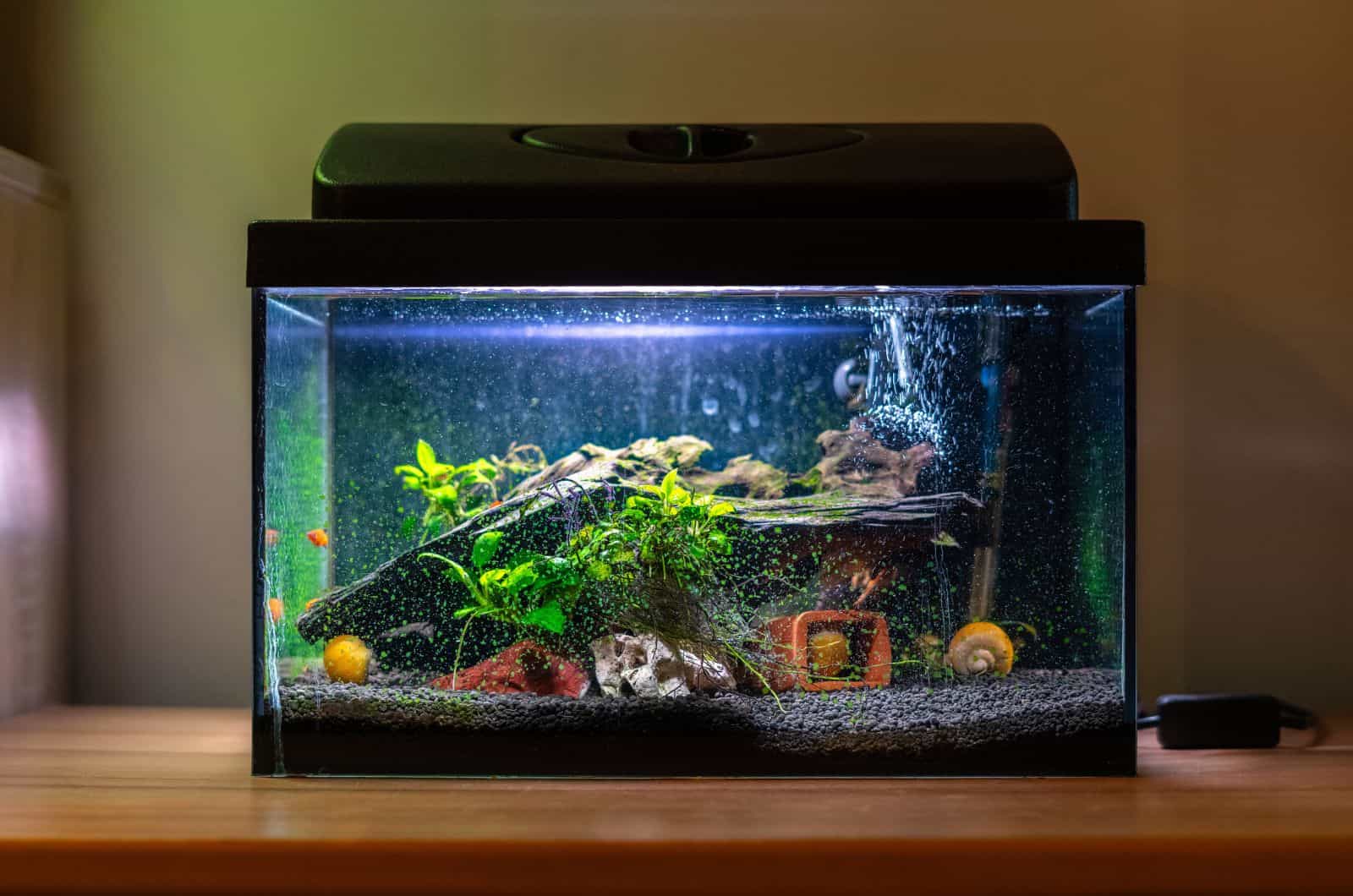 Now we come to the most famous arium, the aquarium. Again, the root word helps us understand what type of enclosure this is.

The main characteristic of this container type is that you can only grow aquatic plants and animals in it.

The most common type of aquarium is a fish tank with some live plants that can grow when completely immersed in water. Some aquariums may contain freshwater crabs and other animals.

However, the aquarium isn’t only restricted to animals, as you can have one filled with plants only.

This type of container is an artificial habitat.

It can be difficult to determine exactly what a riparium is. They are sometimes described by enthusiasts as planted containers that mimic wetlands or the edge of riverbanks where borderline plants flourish.

The best examples of borderline plants are aquatic plants or plants that grow well in wet conditions.

I like to incorporate small islands into these containers, which broadens their appeal as unique aquatic exhibits. I find most materials on Amazon.

These enclosures either have a glass top over them or are completely open.

Some enthusiasts choose all-water ripariums, while others prefer them only partially filled with water. I wouldn’t call a water-based container a riparium. I mean, it’s an aquarium.

You can also grow semi-aquatic animals, such as snails, in ripariums. 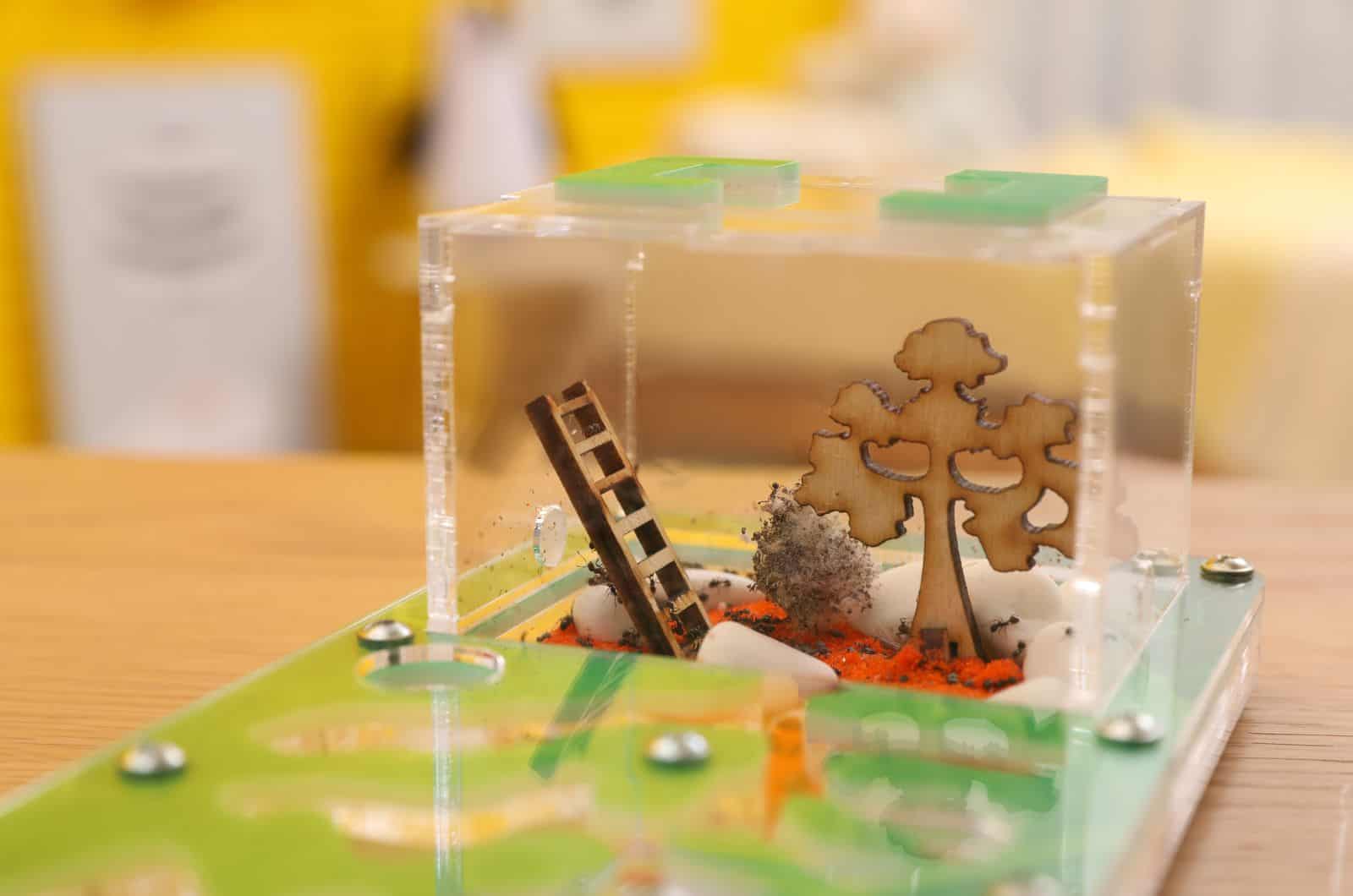 Now we come to a type of vivarium known as a formicarium. It’s basically a fancy term for an ant farm.

The first ant farm was constructed by Charles Janet in the 1900s. He sought to increase the ant colony’s visibility for observation purposes.

His innovative 2D ant nest design was the forerunner of several patentable ideas.

A formicarium includes different substrates that the ants excavate into and form their own colony. 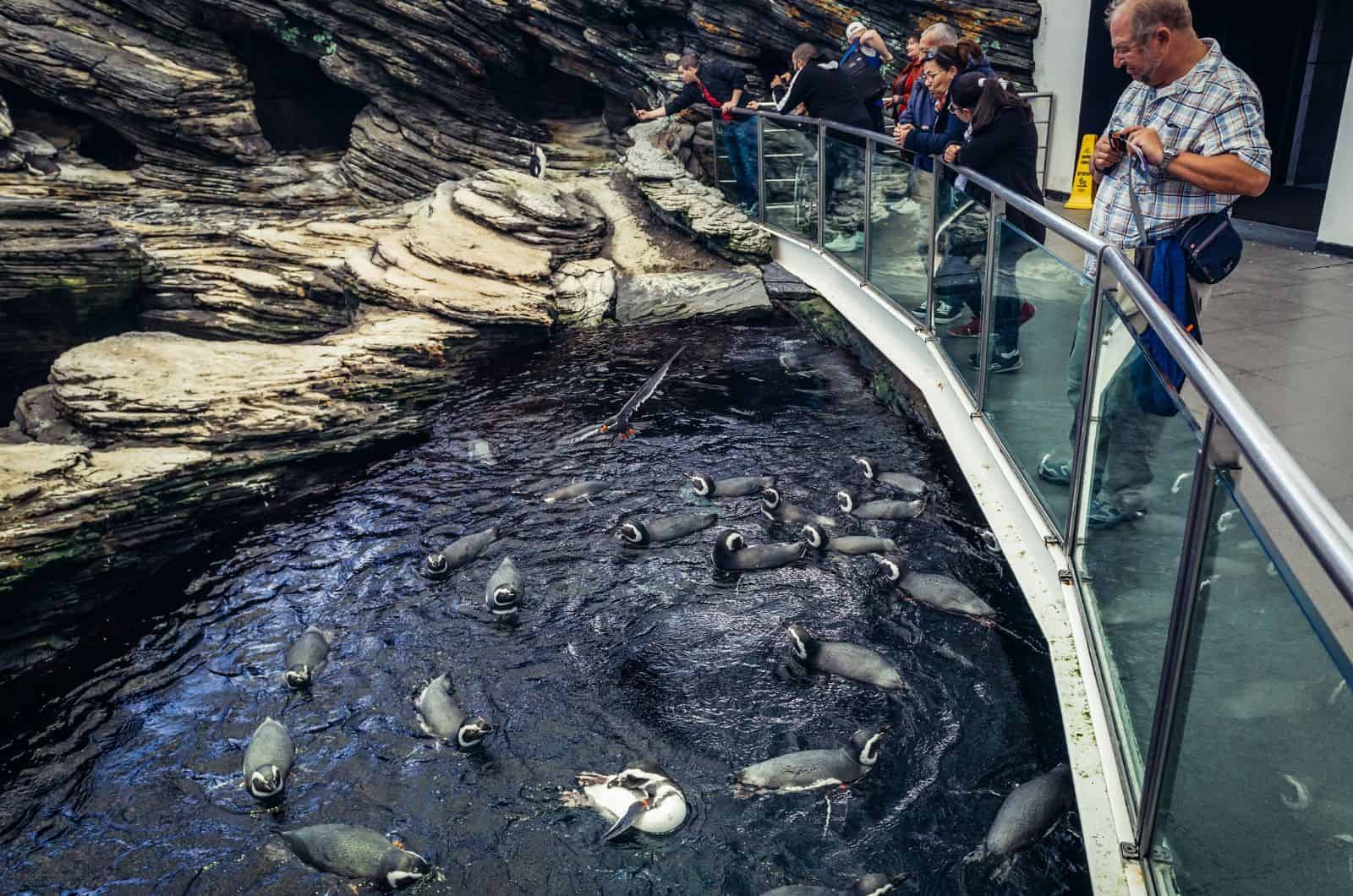 If not for oceanariums, I would never have seen a shark with my own eyes. I was visiting Canada, and went to Marineland.

There are large oceanariums that portray ecosystems with sea animals, especially massive whales! 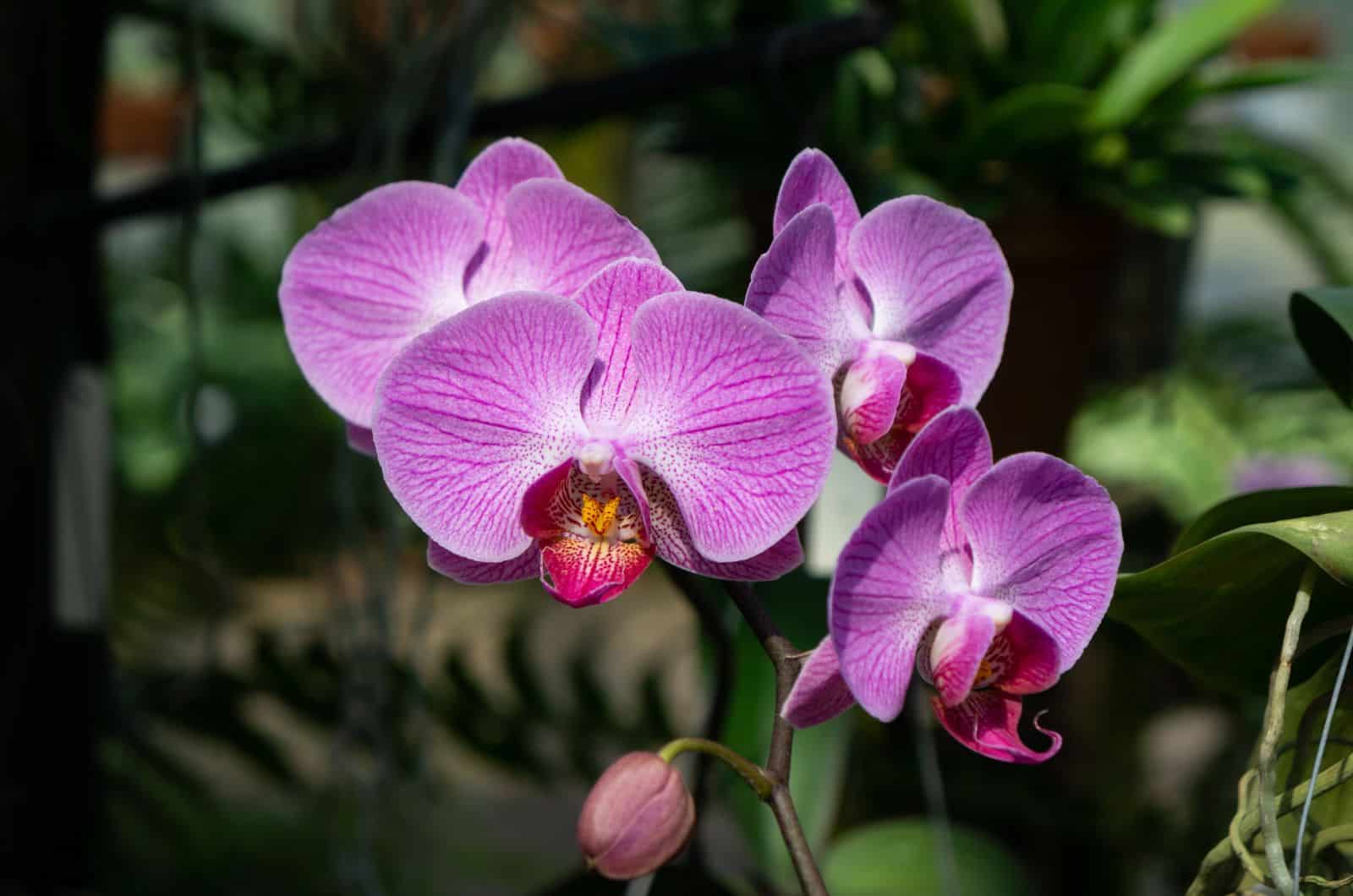 An orchidarium is a controlled area with ideal environmental conditions for various orchid species to flourish and proliferate, mainly for commercial production and conservation.

Orchidariums are specifically made to maintain humidity, airflow, and the right illumination. They also feature an intricately planned drip system that provides irrigation and fertilization.

In essence, these containers are types of vivaria, but they are specifically designed for orchid growing. 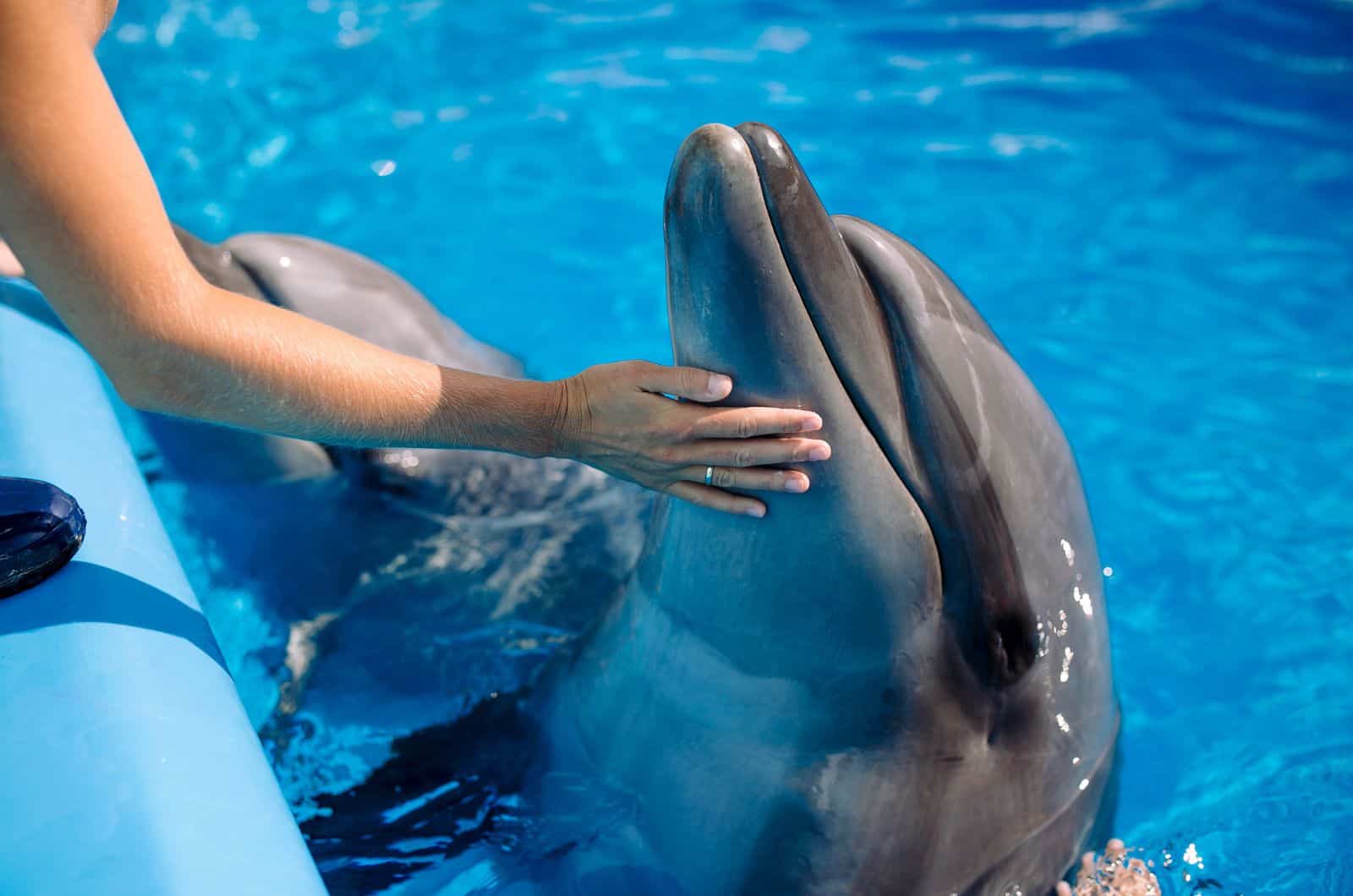 Dolphinariums are actually types of aquariums designed only for dolphins.

Dolphins are usually kept in a sizable reservoir of water, such as a swimming pool. Nevertheless, they are also frequently kept in open-water enclosures for research or public displays.

Some dolphinariums only have one area where dolphins entertain guests by doing stunts.

The most common species held in these ariums are bottlenose dolphins due to their long life span and ease of training.

Serpentariums are my least favorite arium type! Serpens is a Latin term for snakes, so yes, these are containers for snakes.

This kind of container creates ideal circumstances for reptile life and reproduction.

Some serpentariums are specifically for scientific or medical objectives. Other serpentariums keep snakes (especially rare species) so that visitors can see and learn about these animals that they wouldn’t (luckily) otherwise see. 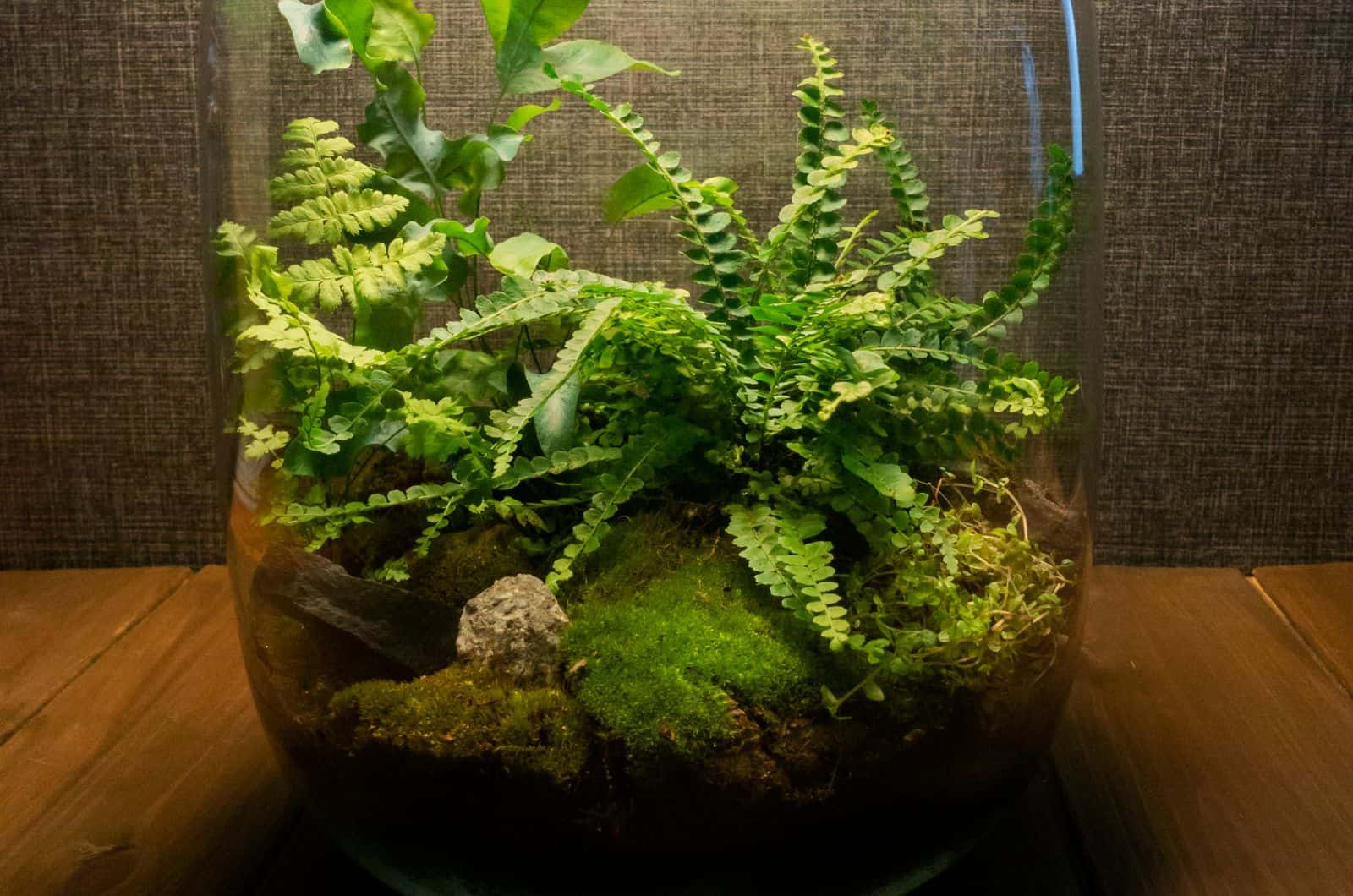 The mossarium is another transparent container, and it serves primarily for growing moss. This type of enclosure is now very famous in America. Still, the eastern world started using it a long time ago.

You will rarely see other plants in these containers, and if you do, they’ll most certainly be tropical plants. 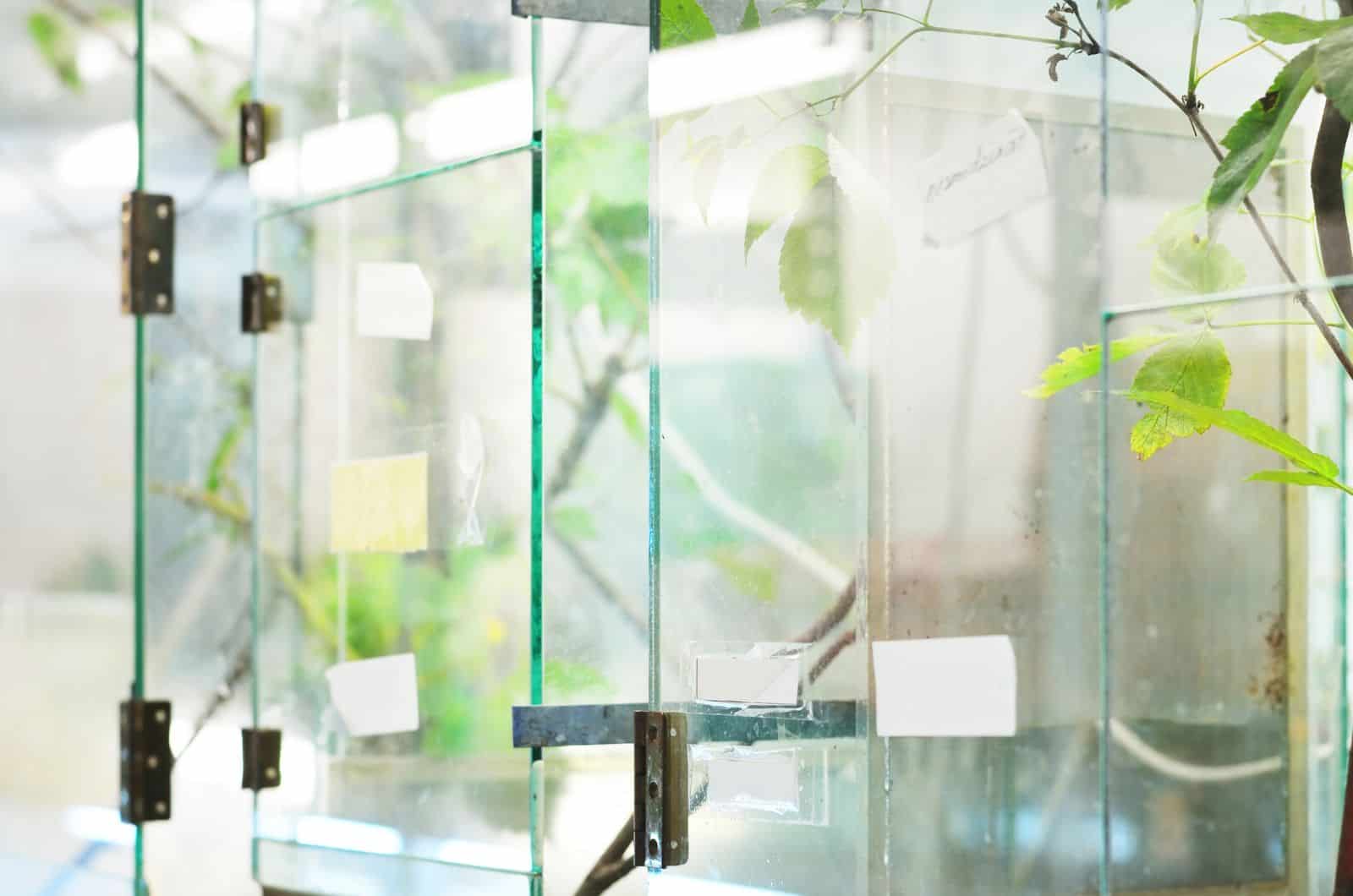 This is an interesting type of container used for raising a diverse range of insects. What we call a zoo for sea or land animals is an insectarium for insects.

Spiders, crickets, scorpions, cockroaches, woodlice, bees, or any other insect may be raised in these containers.

The primary function of these containers is for study purposes. Different types of insects, the natural environment, and the importance of these creatures have been observed in insectariums. 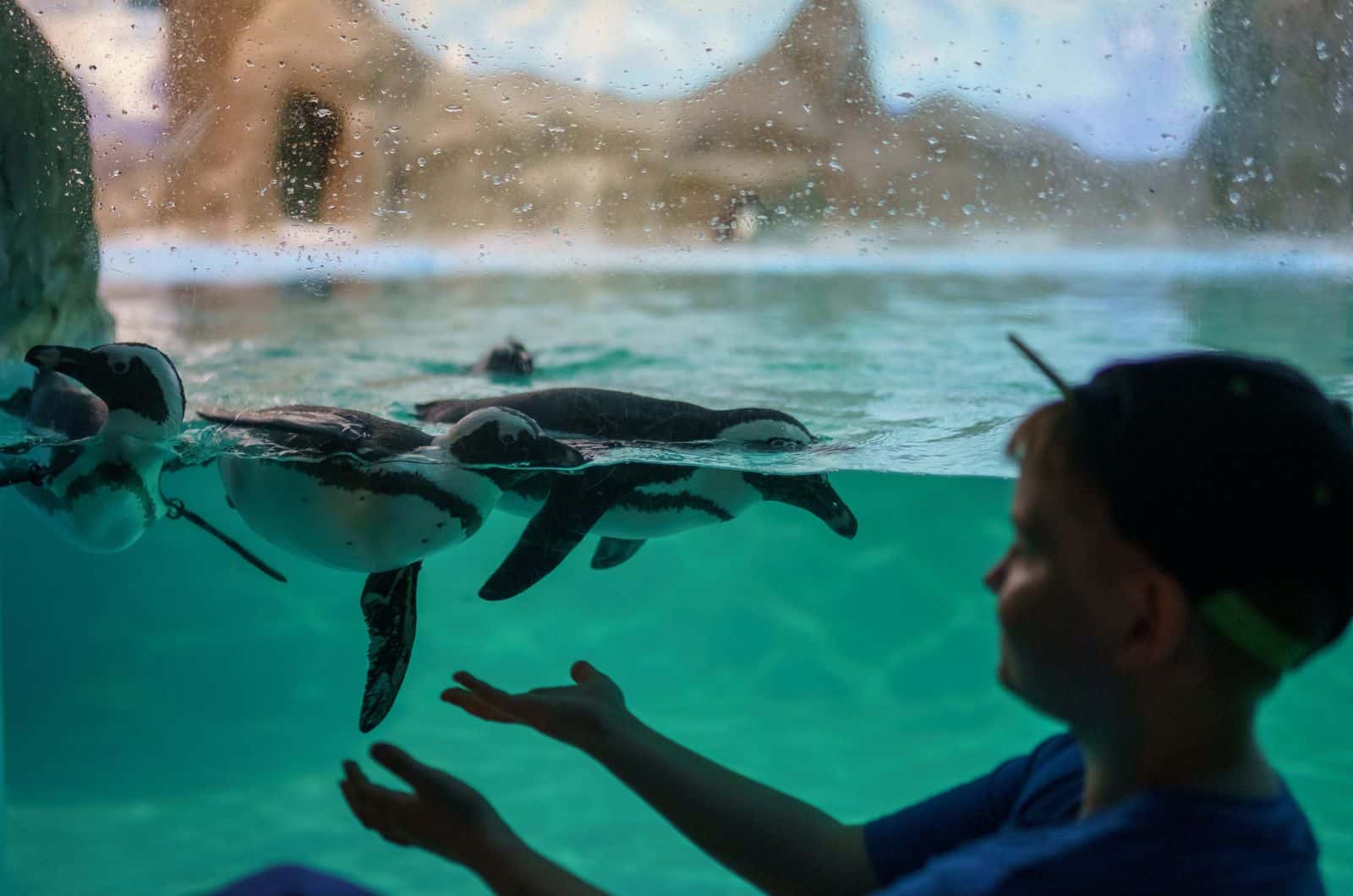 I know it seems like someone decided to use the suffix arium for any old plant or animal sometimes!

As you may guess, penguinariums are enclosures designed for penguins. Penguins are animals, which makes this container a type of vivarium.

These containers mimic the natural surroundings of penguins, which is why they are often seen in large zoos, such as Detroit zoo.

Penguins are cold-loving animals, and they are found in the coldest regions of the world, so most people would never see a penguin if it weren’t for these enclosures. Of course, for adventurous people and those who aren’t scared of death by freezing, penguinariums aren’t as important!

That’s why there are so many visitors to penguinariums, I guess!

I assume that the word arium isn’t your favorite. Don’t blame Latin; we are the ones that add root words. All jokes aside, these containers have great purposes.

There are also other types of ariums that serve for research and medical purposes, and some are placed in different zoos for visitors. 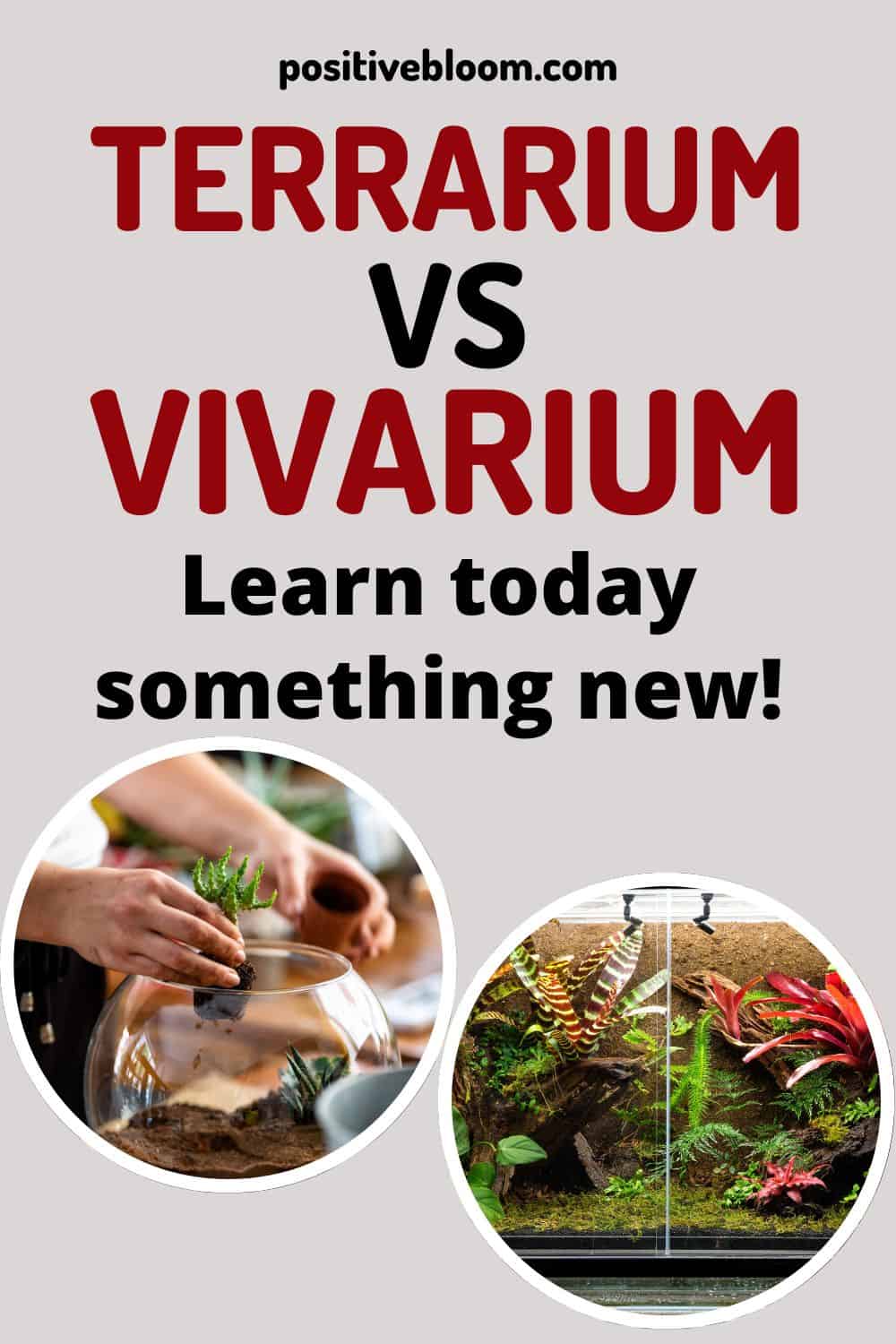