It’s always a good idea to use mulch or wood chips as ground covers, but which one is better?

We have made a detailed comparison of both to help you decide!

Wood chips are often referred to as mulch, or rather, wood chip mulch. When we say mulch, we usually mean bark mulch, although there are many different types of mulch.

Both of these organic materials have their advantages and disadvantages, and we will go through each of them to help you choose the best material for your garden.

We have done our research and written a complete wood chips vs mulch analysis, so let’s dive straight in!

Wood Chips Vs Mulch: What Is Mulch? 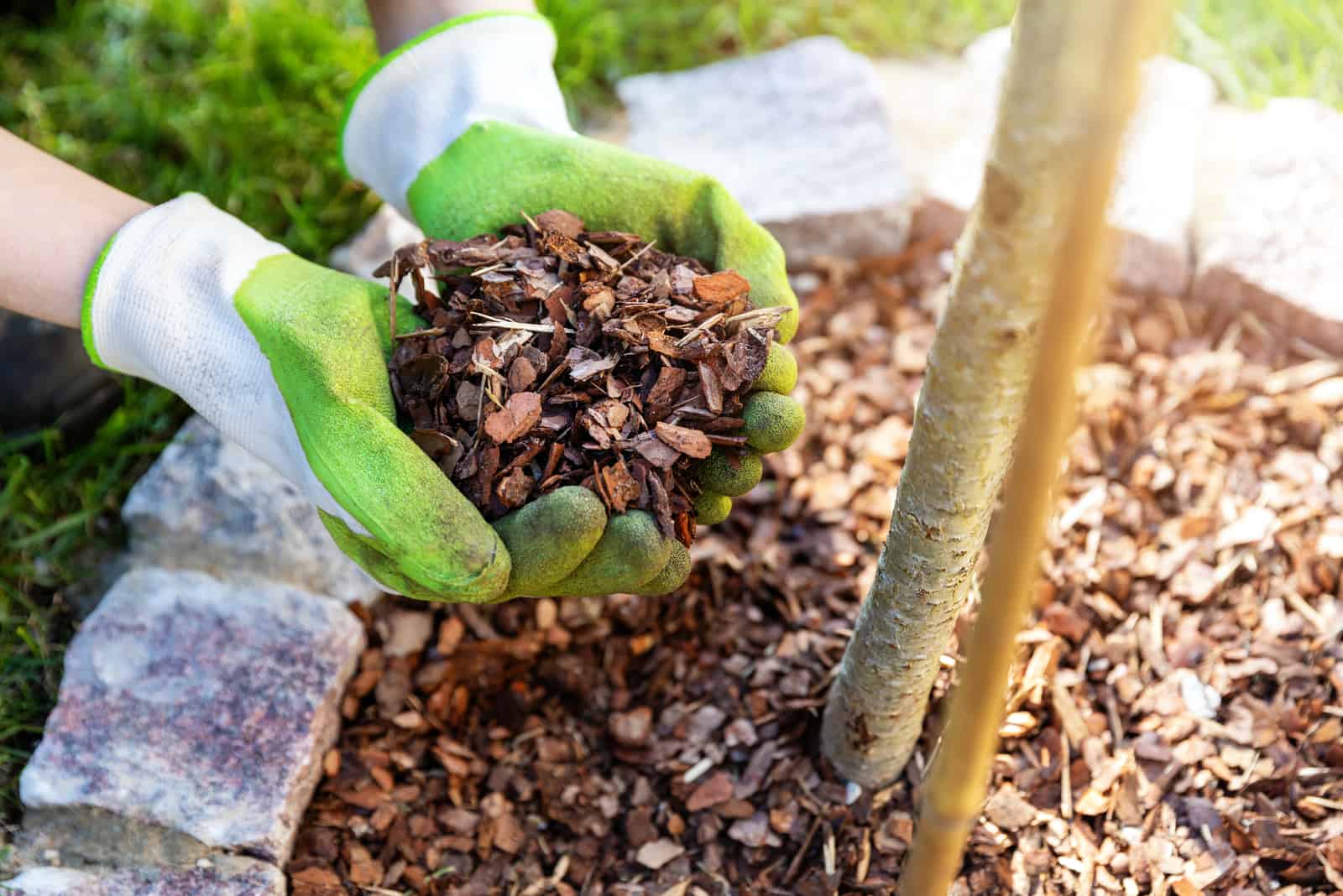 The term “mulch” refers to any type of material used to cover soil in a garden. Gardeners absolutely love mulch due to its numerous benefits.

There are many types of mulch as it can be made out of any material, however, the two main distinctions are between organic mulch and inorganic mulch.

Organic mulch can improve the structure and drainage of your soil and also provide nutrients as they decompose.

• Bark, either Shredded or Chipped

As we are going to focus on bark and chipped mulch today, let’s talk about their primary functions.

Bark mulches are suitable for use in areas where a lot of digging isn’t necessary, like trees, garden beds, and shrubs on your walkway or planting for foundations. They don’t mix well in the soil so it would be tiring to constantly move it around when you want to plant new seeds or plants.

However, they are one of the best mulch types, primarily because they last longer than the others!

Now, let’s look at the other side.

Inorganic or synthetic mulch has a similar function to its organic counterpart: it retains moisture and prevents weed growth. The only difference is that they don’t decompose, so your soil won’t be getting any nutrients!

They last longer, though, so you won’t have to change them repeatedly.

We won’t go into details of all these options here, instead we will go straight to the pros and cons of wood chips and bark mulch! 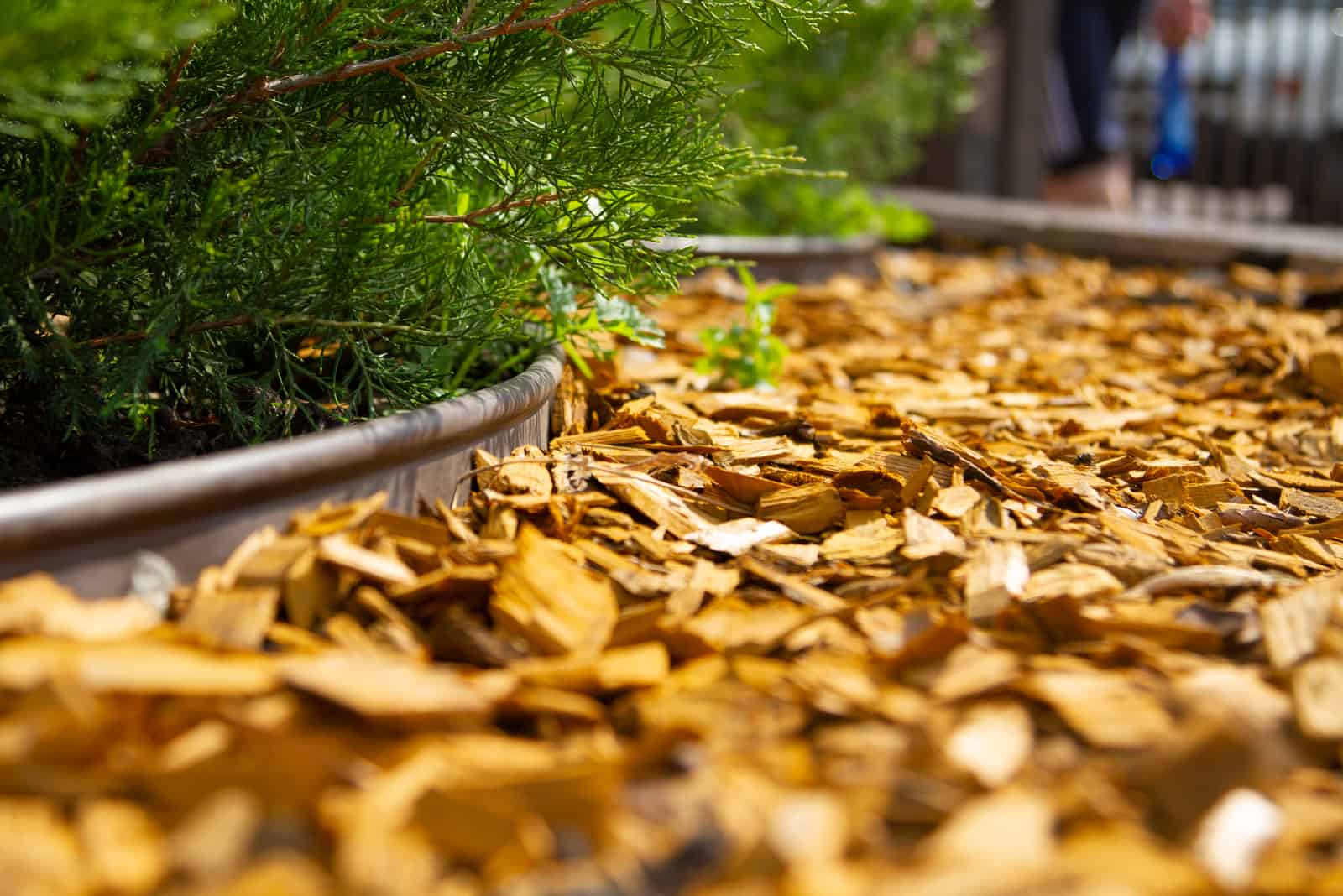 Even though we are talking about similar wood products, there are quite a few differences that can help you distinguish between them. This will also help you determine which one you should use in your garden.

Here is a handy summary of all the information:

Wood Chips vs Bark Mulch: How Are They Made?

Both wood chips and bark come from the same tree, but the outcomes are very different!

For instance, wood chips are made out of the interior part of the tree by shredding it to get small wood chips. These can last for approximately five years.

On the other hand, bark mulch is made of the exterior part of the tree, or the bark. It is made by chipping away the bark, and the most common trees involved are pine and fir. These can last for about 10 years!

As they are made out of different parts of a tree, their textures are different. When we think of bark, we often think of it as a rough material, which is exactly the texture of a bark mulch!

It has a much tougher texture compared to wood chips, which have a kind of soft and more dense texture and are a lot chunkier. These are the reasons wood chips are more suitable for flower beds.

Another advantage that bark mulch has over wood chips is that it contributes to the nutritional content of the soil. It can also make the soil more nutrient-rich, which is beneficial to lots of veggies. This is why it should be applied to garden areas.

They both have the ability to prevent weed growth by preventing the sunlight from reaching the weed’s roots, but also by encouraging growth and reducing soil erosion.

However, bark mulch can easily be washed away by heavy rains and dry wood chips can be blown away by strong winds. Also, wood chips can start producing toxic chemicals after a period of time, which will damage your plant’s roots and overall health.

They also don’t make the soil compact like bark mulch does because it doesn’t mix into the soil. This is the reason wood chips are great ground covers that should be used primarily in playgrounds and trails (where there is high foot traffic).

When To Use Bark Mulch Instead Of Wood Chips

There are a few things that you should consider:

• Bark mulch is cheaper — if you are buying your own mulch instead of making it, then you should consider buying bark mulch because it is more cost-effective than other types of mulch.

• If you want more nutrient-rich soil — bark mulch can contribute to the nutritional content of your soil as it decomposes, so you won’t need to add other organic matter in large amounts (this saves you a couple of bucks).

• It stays put — fresh wood chips can easily be blown away, while bark mulch mixes with the soil and stays put.

• Doesn’t produce much nitrogen — both wood chips and bark mulch can increase the nitrogen level in the soil, although bark mulch produces significantly less than wood chips. In some cases, you will have to provide your plants with an additional nitrogen source, especially if they produce lush foliage. This can be done by applying nitrogen-rich fertilizers or adding coffee grounds.

Wood Chips Vs Shredded Mulch: How Is It Made?

We have already talked about how wood chips are made, and now we are going to solely focus on shredded mulch.

An interesting thing about shredded mulch is that it is formed as a byproduct of the paper and lumber industries, and also comes from shredded pallets. This is why we refer to shredded mulch as a type of synthetic mulch.

This is the reason wood chips are better at reducing water evaporation, and also why they take longer to decompose.

As shredded wood mulch is made as a byproduct of industrial processes, it contains a lot of chemicals that could be toxic and prevent plant growth and development. They also contain dyes that can contribute to soil compaction.

However, as shredded mulch comes in different colors, they are primarily used for landscaping and flower beds.

In most cases, shredded mulch ends up in a landfill instead of being used as a mulch layer in a garden.

Why Should You Use Wood Chips? 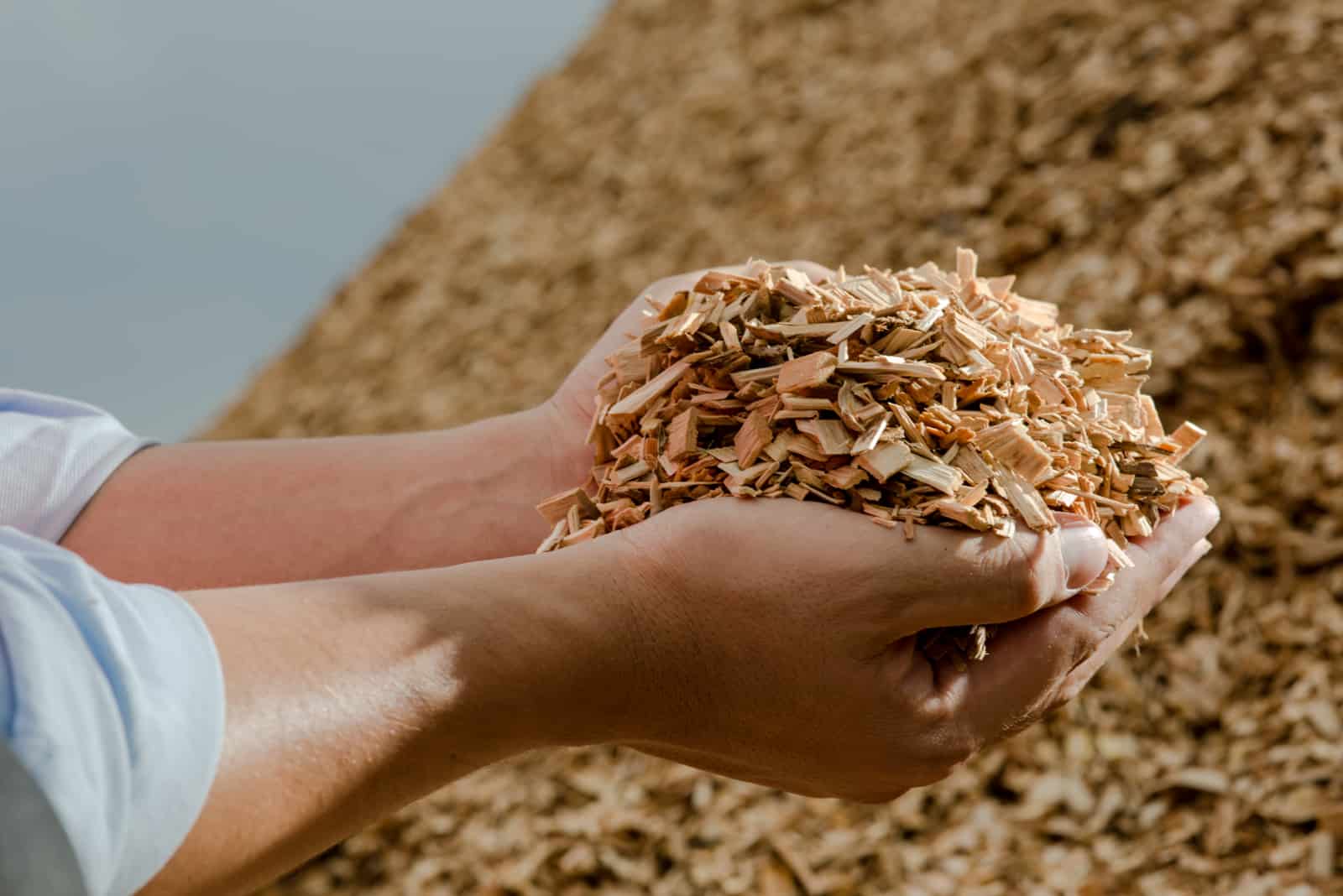 Now that we have covered both types of wood mulch, let’s focus on wood chips as mulch and its benefits and drawbacks.

Bear in mind that wood chips can be mixed with green waste, which makes so-called arborist wood chips that contribute to soil quality as they decompose and activate various helpful microorganism in the soil.

Wood chips should primarily be used as a mulch layer for perennials, shrubs, and certain fruit-bearing plants and trees. They are perfect for moisture retention, landscaping, sustainability of the soil, and reducing erosion, but also as compost that contains carbon.

How To Apply Wood Chips As Mulch

Applying wood chips as mulch is a pretty straightforward process.

All you have to do is to spread them on the soil surface around the base of your plant — usually around 2 to 4 inches. Width is also important, though it depends on the size of your plants.

Wood chips can protect your plant from extreme weather conditions. They won’t let your plants be blown away!

In addition to this, they will also prevent weed seeds from germination so you won’t have to deal with removing weeds or applying herbicides and pesticides.

For clearer instructions, check out this video:

Wood Chips As Mulch: The Disafdvantages

Wood chips as mulch unfortunately have a dark side. When wood chips are outside for a long period of time, they might start producing toxic substances and acids that are harmful to your plants.

This happens due to reduced air circulation. It is extremely dangerous in warm weather as they emit a toxic vapor that can damage the plants in your vegetable garden.

Another issue is that they can attract termites! Termites are attracted to fresh wood, and if you apply a large amount of fresh wood chips around your house, they might end up paying you a visit!

I hope that this thorough wood chips vs mulch analysis helped you decide what type of mulch to use. Both wood chips and mulch have their advantages and disadvantages, you just have to use the one that suits your garden the best.

Bear in mind that wood chips should primarily be used for shrubs, perennials, and trees, while mulch has more versatile applications. Both have a remarkable ability to retain moisture and prevent weed growth, but mulch contributes to nutritional content more than wood chips.

However, wood chips don’t make the soil compact and are normally used for playgrounds, walkways, and landscaping purposes.

Bear in mind that wood chips can start producing toxic chemicals and fumes if they are exposed to hot temperatures for a long period of time, which means they can harm your plants and prevent their development.

Take into consideration the climate in your area as well, because dry wood chips can easily be blown away by a strong wind and bark mulch can be washed away by heavy rains.

If you live in an area with extreme weather conditions, consider applying other organic mulch varieties because you won’t have to reapply them constantly. 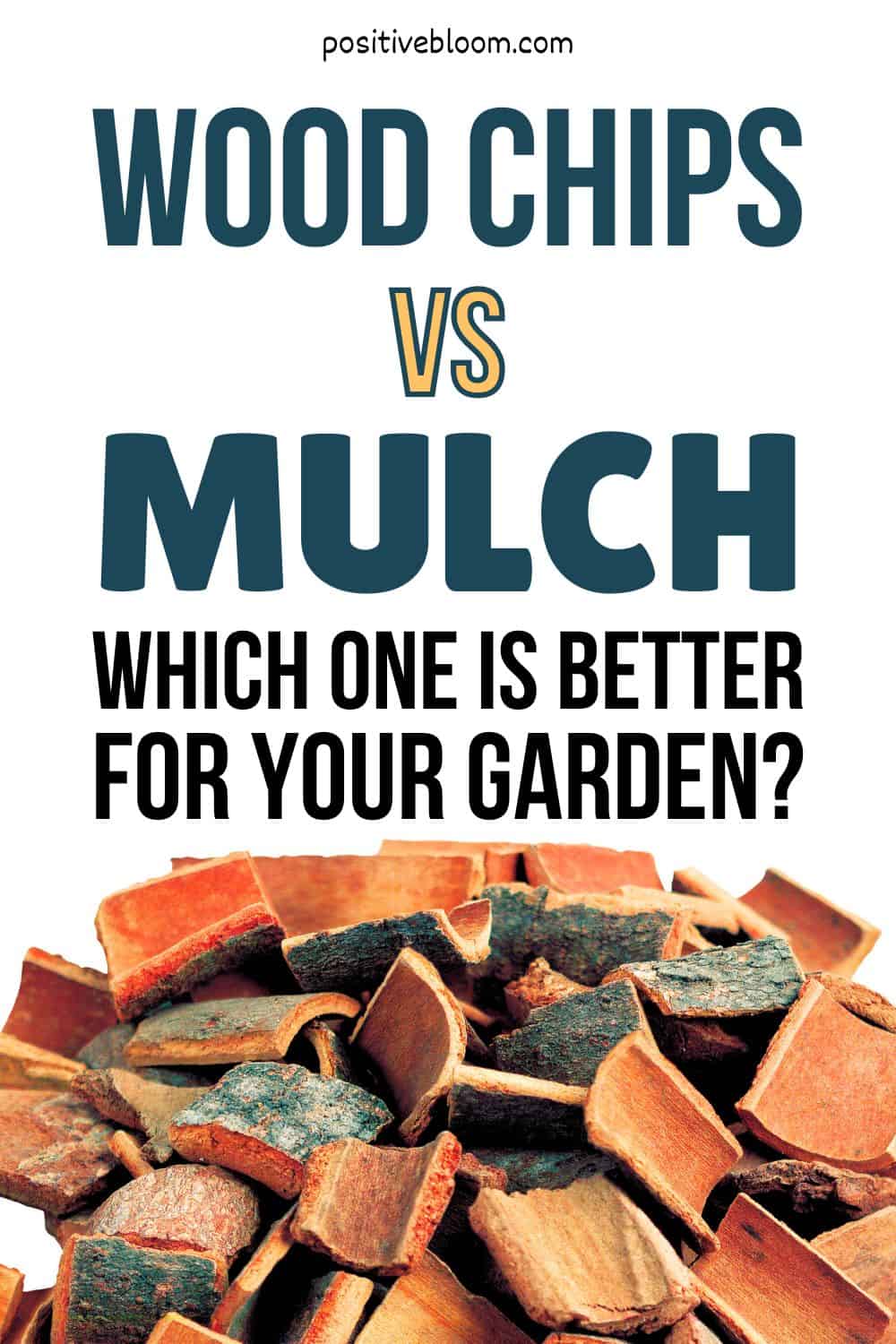 Factors To Help You Decide Between Cedar vs Cypress Mulch

[…] material has pros and cons (just remember the differences and similarities between wood chips and mulch), but a good guide can help you choose […]

The 9 Stages Of Growing Asparagus: All Your Questions Answered

Sand For Gardening: How, When, And Why You Should Use It

[…] can research and try different mulch types to see what works best for your garden. You can examine the advantages and disadvantages of wood chips and mulch, the pros and cons of grass clippings and straw, […]