Keeping your lawn nice and tidy can sometimes be tiring. In addition to constant mowing, you will also have to aerate and dethatch your lawn. However, we wouldn’t do such things if they didn’t help the lawn to look its absolute best.

A thin layer of thatch can sometimes be beneficial to your lawn, but problems can arise due to thatch buildup. This means we have to get rid of excessive thatch buildup before it suffocates the lawn!

However, dethatching requires heavy machinery, and it can sometimes do more harm than good, so let’s look at the list of pros and cons of dethatching lawn to see whether it’s worth it for you!

Pros And Cons Of Dethatching Lawn

Thatch is a layer of organic matter between the soil surface and the zone of vegetation. It consists of grass clippings, grassroots, dead grass blades, runners, stem nodes, and lignin, which is resistant to microorganisms and causes thatch to build up quicker before it can break down.

A thick layer of thatch causes numerous problems. For instance, it prevents oxygen and water from reaching the grassroots, and at the same time exposes them to various pests and diseases. Mower scalping can also occur, which is when the height of the cut is lowered because the lawn mower sinks into the thatch.

To get rid of your lawn thatch problems, you must dethatch your lawn.

Let’s look at the benefits of dethatching first.

Pros Of Dethatching Your Lawn 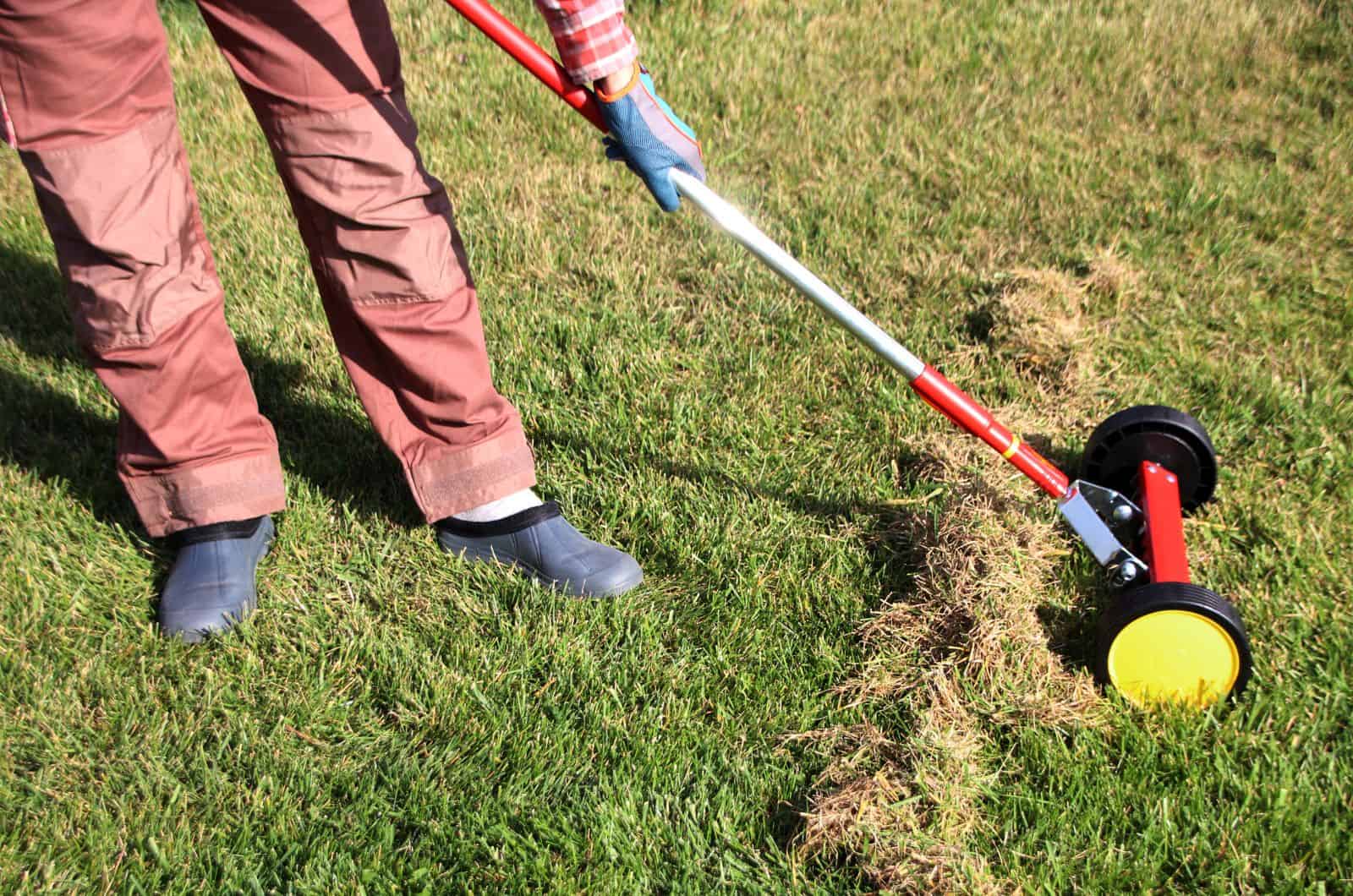 Dethatching is the process of removing an excess amount of thatch from the lawn. Depending on the amount, thatch can be removed using dethatching rakes, power rakes, a vertical mower, or a dethatching mower. In certain areas, people try to get rid of thatch by burning their yards, but this is very dangerous and ineffective.

Dethatching can help you have a healthy lawn again, but only if you are being careful and not causing any damage to the turfgrass and its root system.

As the thatch builds up, it creates a vegetative barrier that prevents fertilizers from reaching the grassroots. Dethatching removes this barrier and allows fertilizers to penetrate the soil, which is able to improve grass growth and development.

Similarly to fertilization barriers, thatch also prevents oxygen, water, and sun from reaching the roots, which are all necessary for keeping your turfgrass alive!

Removing thatch allows your grass to breathe, drink, and photosynthesize.

Anaerobic conditions in the thatch layer create a perfect environment for many fungi, which can infect the grass and cause numerous fungal diseases. The layer is also warm and moist, which makes the perfect growing conditions for numerous pests.

When you remove the thatch layer, you are getting rid of all those tiny bugs and fungi!

If you are overseeding a lawn with a thick layer of thatch, you shouldn’t expect new grass any time soon. The thatch often combines with the topsoil, and the grass seeds usually get trapped in this layer.

This layer doesn’t contain enough nutrients, so the seeds would barely grow and the majority of them wouldn’t be able to grow at all!

Once you remove the thatch, your seeds will be able to reach the soil and get all the nutrients necessary for germination and development.

Herbicides must first get to the soil to access the roots (if they are the type of herbicides absorbed through the roots). You won’t be able to kill any weed seeds or prevent weed growth with a thick layer of thatch!

As we mentioned, thatch consists of various plant materials (roots, stems, blades, runners). By dethatching, you are getting rid of all those dead plant materials as well. 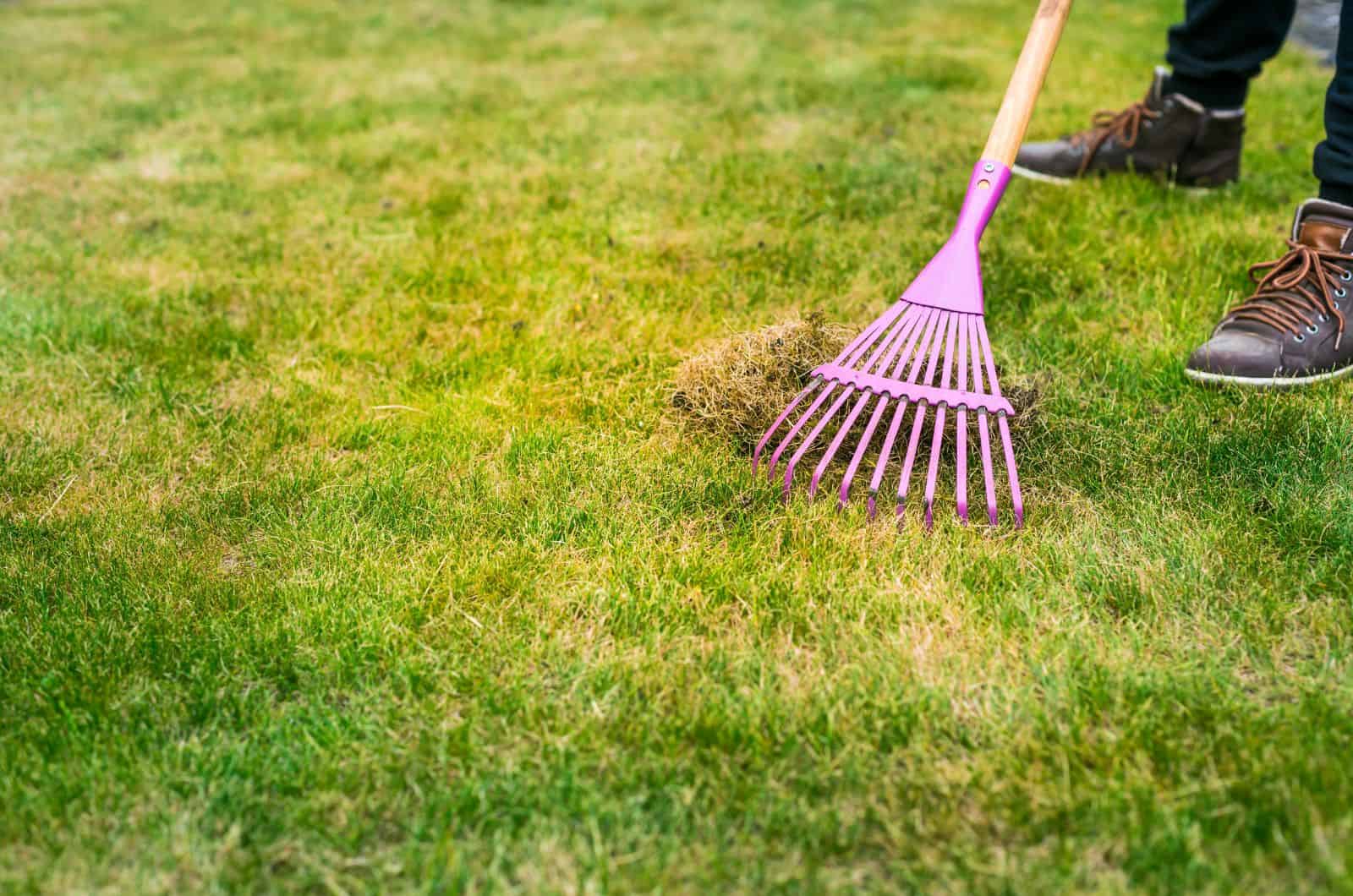 Having a thin layer of thatch (about a half-inch) can sometimes be beneficial. Thatch can serve as a mulch by preventing weed growth and retaining soil moisture. It also helps with microbial activity, reduces temperature fluctuations, slows down water loss, and protects your grass from foot traffic.

All of these advantages are removed by dethatching!

So, let’s see what other cons arise from dethatching a lawn.

1. Dries Out The Soil

Thatch can protect grass from the sun during hot summer days and also maintain a cool temperature. Without thatch, the soil is directly exposed to the sun and heat, which makes it dry out quicker.

This is accompanied by water loss and drought, and a lack of moisture and drought can completely ruin your lawn.

If you are incorrectly dethatching your lawn, especially with a tool like a power rake or a vertical mower, there is a serious possibility that you might end up doing more harm than good. Setting the blade height too low is one example of improper use. The above-ground runners are cut through by the blades of the dethatching tool, making it harder for the turf to recover.

There is also a possibility that you can clog the tines of the dethatching tools, especially if you do it when the grass is wet. Most homeowners already know that cutting wet grass is a big no-no, and the same thing goes for dethatching.

Thatch prevents sudden temperature changes and keeps the soil nice and warm during the colder season. A grass with thatch is, therefore, less vulnerable to harm from frost. After dethatching, the lawn becomes less cold-tolerant and is more susceptible to frost damage in the winter.

Thatch is able to prevent weed growth as it forms a barrier and prevents the weed seeds from getting light, water, and the nutrients necessary to grow and develop.

After dethatching, the weed seeds will have all the necessary conditions for optimal growth.

Renting dethatching tools or paying professionals to dethatch your lawn can be pricey. If you choose to do it yourself, it can be very time-consuming and energy-draining.

Don’t even get me started on the price of dethatching tools!

How To Prevent Thatch Buildup 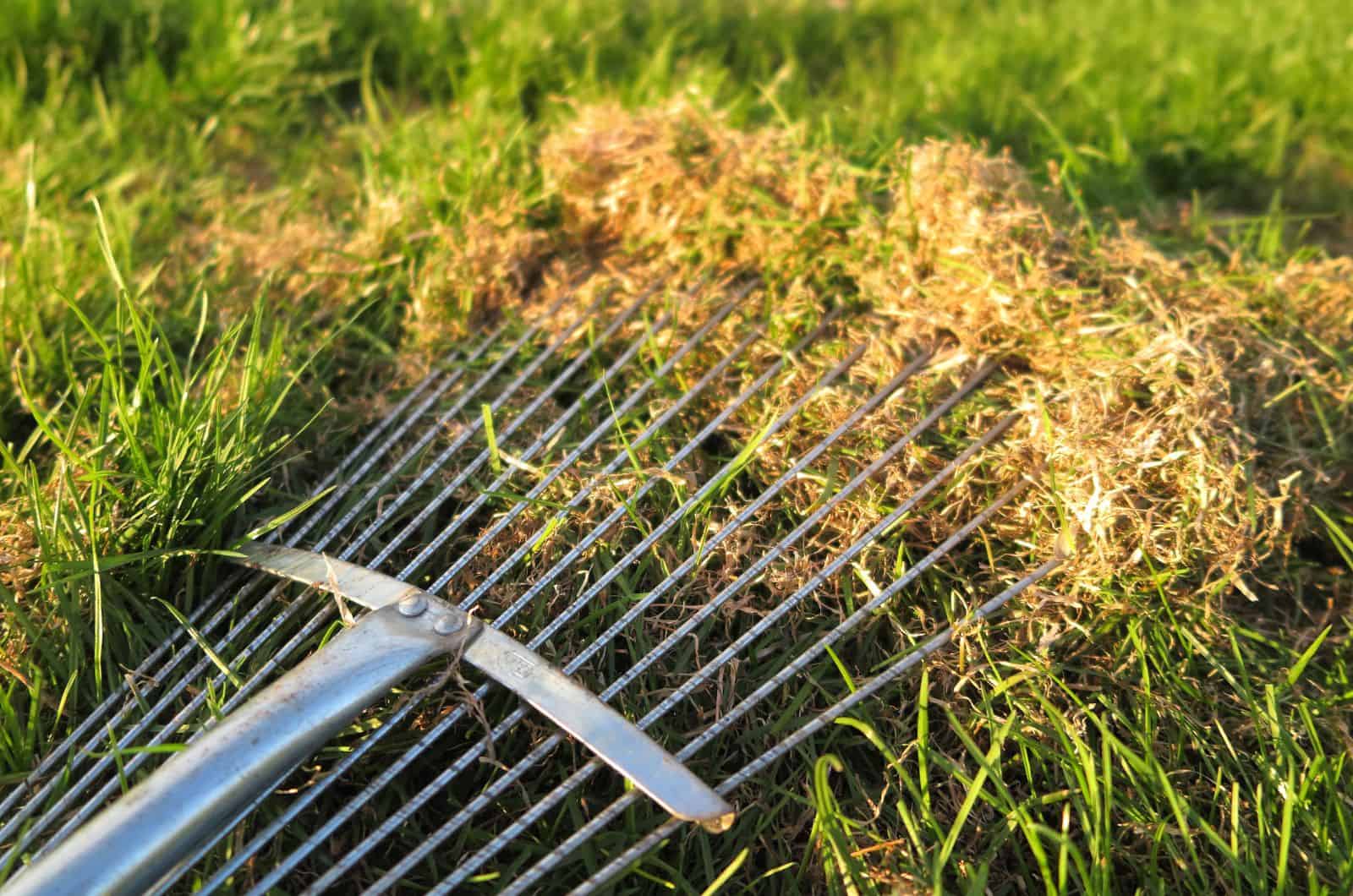 Having a thin layer of thatch can be beneficial, so you must prevent it from building up and creating the thatch problems we just discussed.

Here are some tips on how to prevent thatch buildup:

• You can aerate the lawn — by releasing soil compaction and increasing microbial activity in the soil, core aeration of grass soil minimizes thatch buildup and improves airflow.

• Don’t overwater your lawn — keeping your lawn hydrated is a key part of lawn care. However, some grass types are more likely to develop thatch when overwatered, such as Centipede grass. Carefully determine how much water your grass needs, you can even get sprinklers from Amazon to make your job easier!

• Instead of synthetic nitrogen, try applying compost — this is because nitrogen makes your grass grow more vigorously, which creates thatch with more roots, blades, and stems, but also destroys the microbes that would normally break down the thatch. Compost will encourage lush and vibrant grass growth, and at the same time improve the beneficial microbe population.

• Use liquid dethatchers — they contain bacteria and enzymes that accelerate the decomposition of thatch, which prevents it from building up.

• Track the pH of the soil — changes in soil pH result in decreased microbial activity, which causes thatch to develop. Keep an eye on the pH of your soil and make necessary adjustments to avoid too much thatch development. The ideal pH is around 6.5. 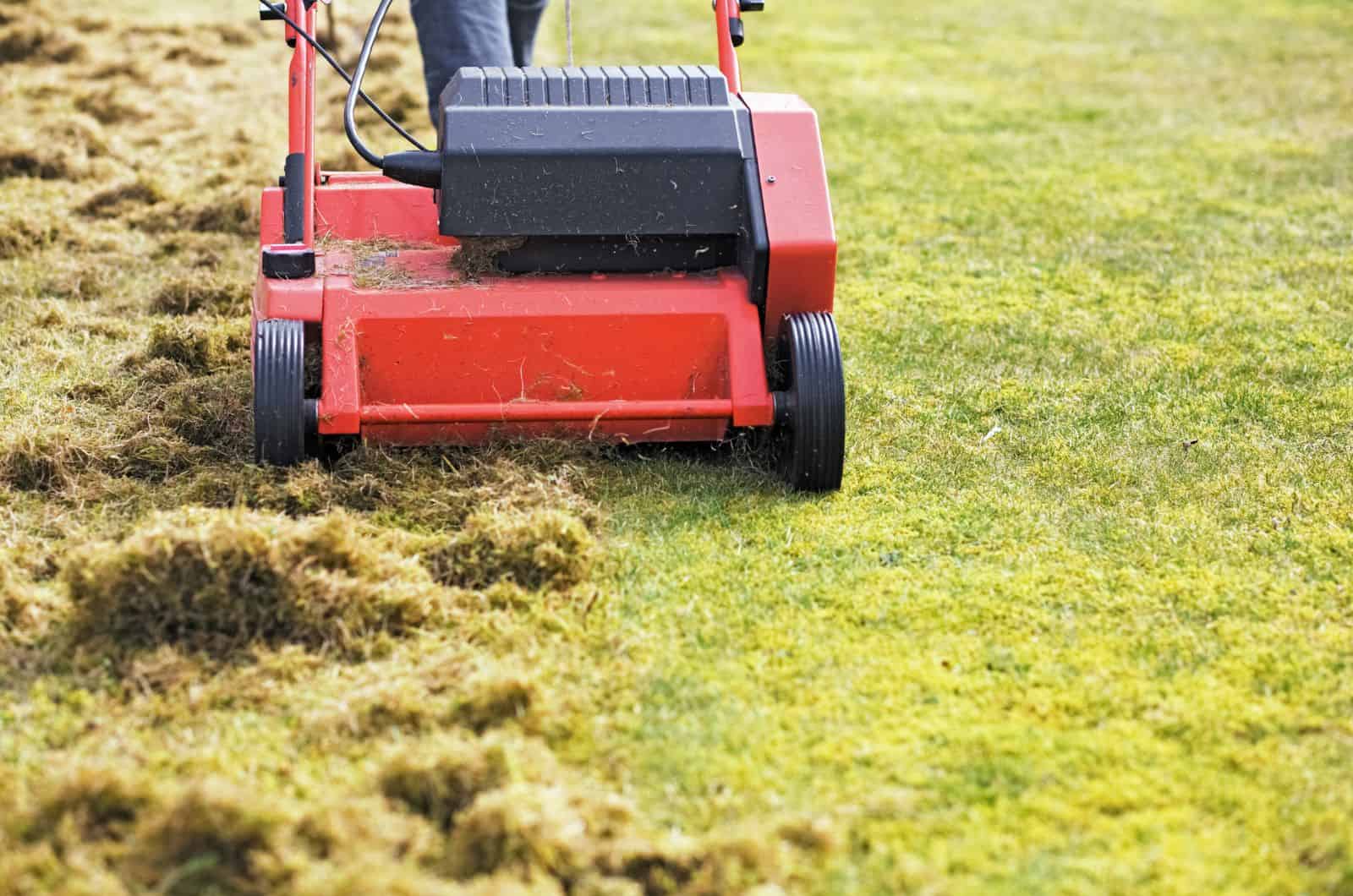 Whereas for cool-season grasses, the ideal time for dethatching would be early fall or early spring.

I would suggest you hire professionals to do it because it is a very hard and time-consuming task, and you can also damage your lawn if you are not being very careful! 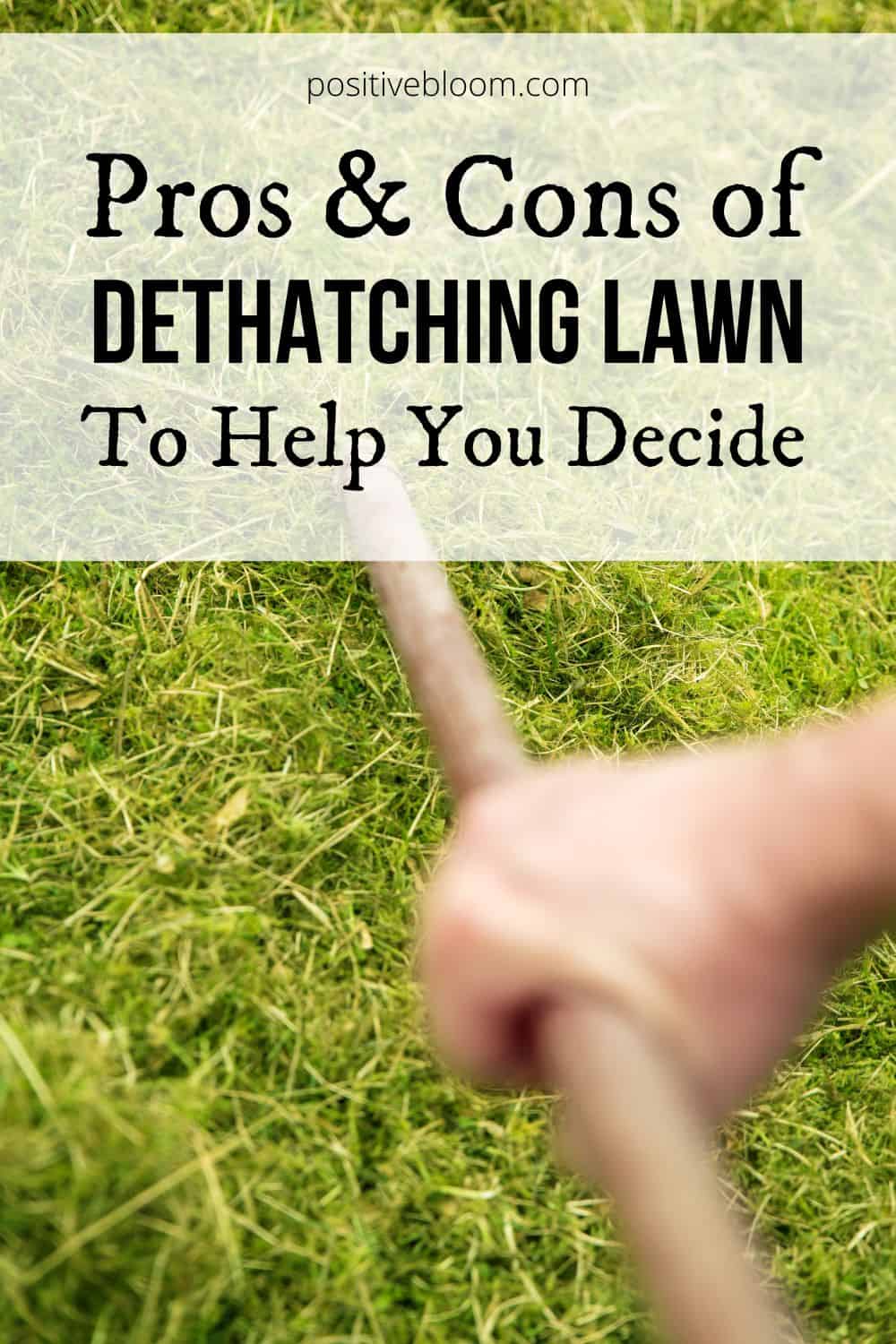