Even master gardeners sometimes get confused with all the different names of plants. When it comes to the Mother of thousands plant, it has a lot of nicknames and it may be tricky to figure out the botanical background of that particular plant.

And things get even more complicated when discussing Mother of thousands varieties!

I decided to write this article to show you a few of the amazing varieties out there, and their features, common names, and botanical background.

The Mother of thousands is a succulent that belongs to the genus Kalanchoe in the Crassulaceae family. The plant was formerly part of the genus Bryophyllum, which is why it has two scientific names.

The one with the term “Kalanchoe” is correct.

The plant is commonly referred to as the Devil’s backbone, Alligator plant, and Chandelier plant.

Here is a list of stunning Mother of thousands varieties. 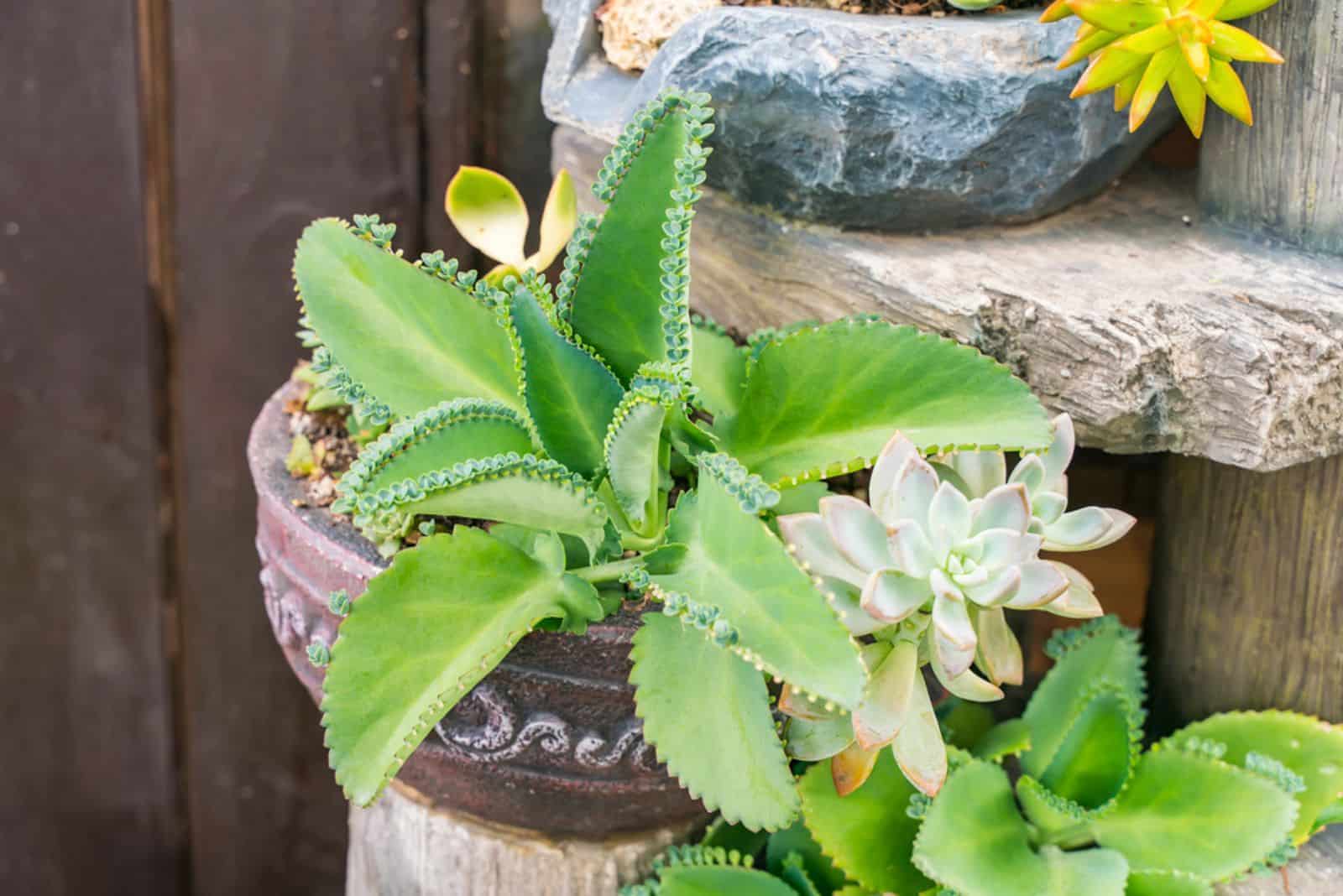 What makes this Mother of thousands variety unique are the leaf margins that resemble teeth. It also features tubular flowers that typically develop into clusters.

The flowers may range in color from delicate pink to vivid reddish-orange. 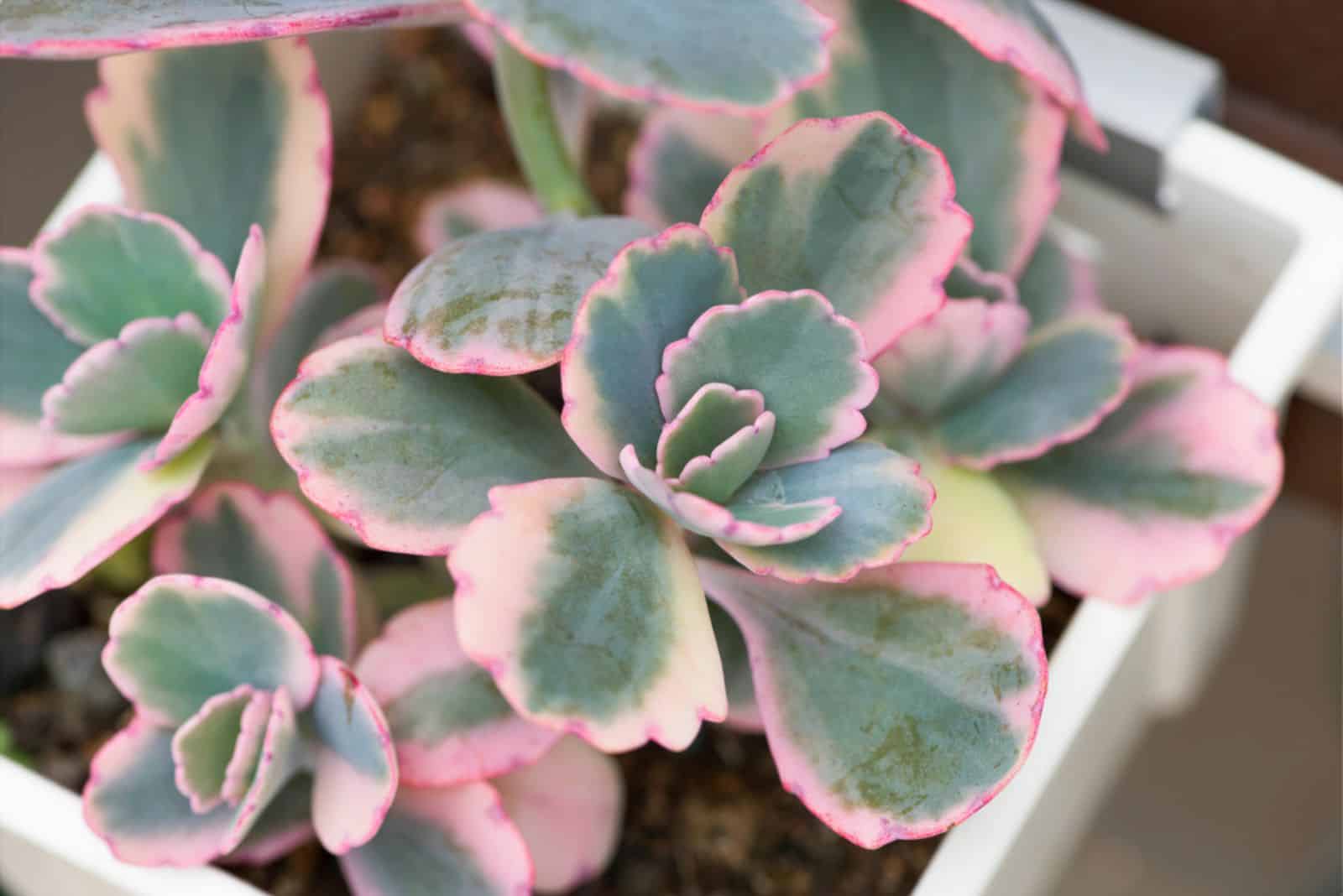 Another Mother of thousands variety is the Kalanchoe fedtschenkoi, aka Lavender scallops or American air plant. It’s native to Madagascar and grown as a houseplant in tropical climates.

The glossy green leaves may change color to pink or red if given too much direct sunlight or faced with drought. 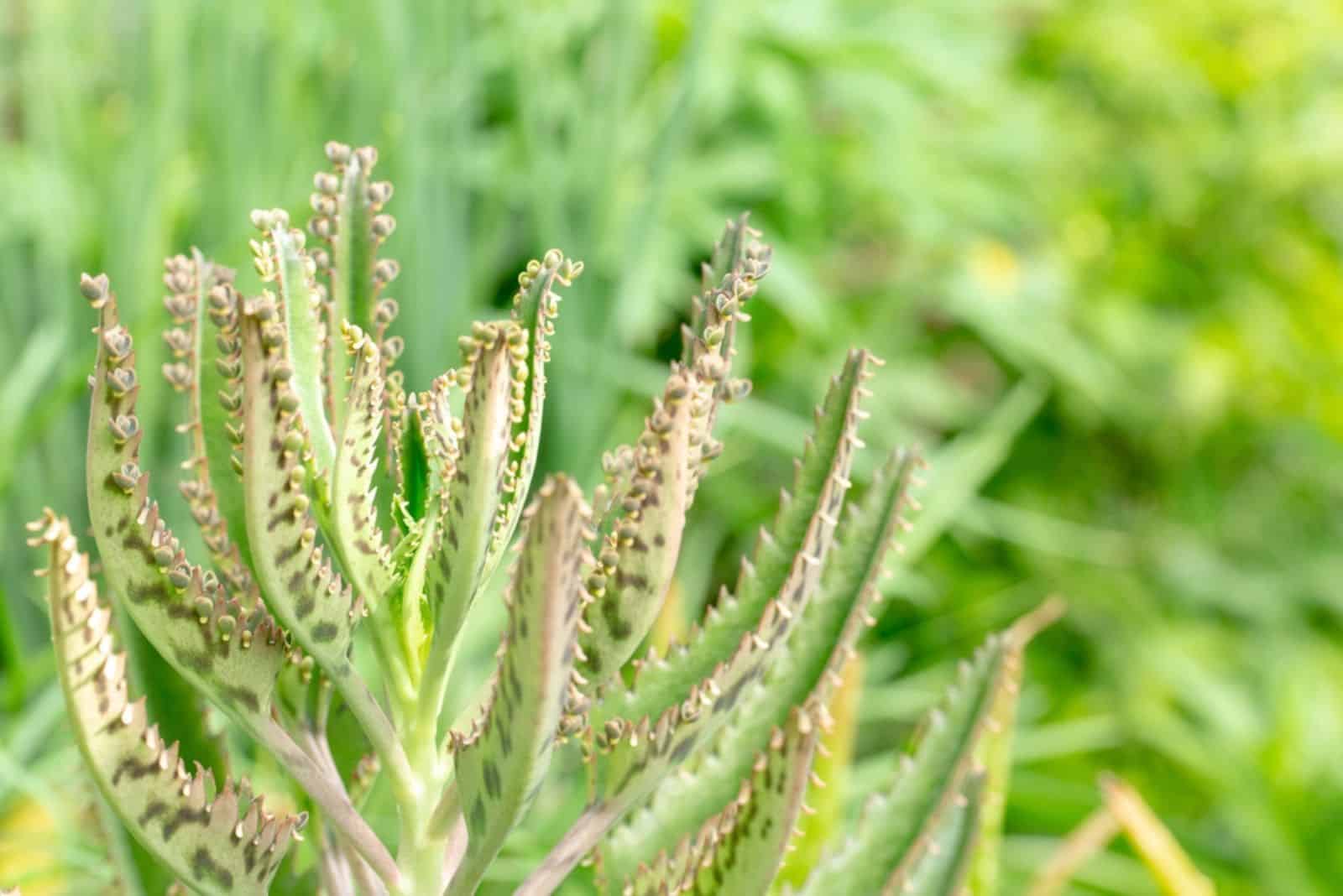 What makes this variety interesting is that it is propagated by plantlets. Tiny plantlets form on the edges of the leaves that simply fall on the soil. Interestingly, these plantlets will start growing roots as soon as they ‘touch the ground’.

They spread quickly and don’t require soil to thrive. You can find small plantlets growing between the leaves or spikes of other succulent species.

I’m sure you won’t be surprised when I tell you that this variety is considered invasive in some parts of the world. 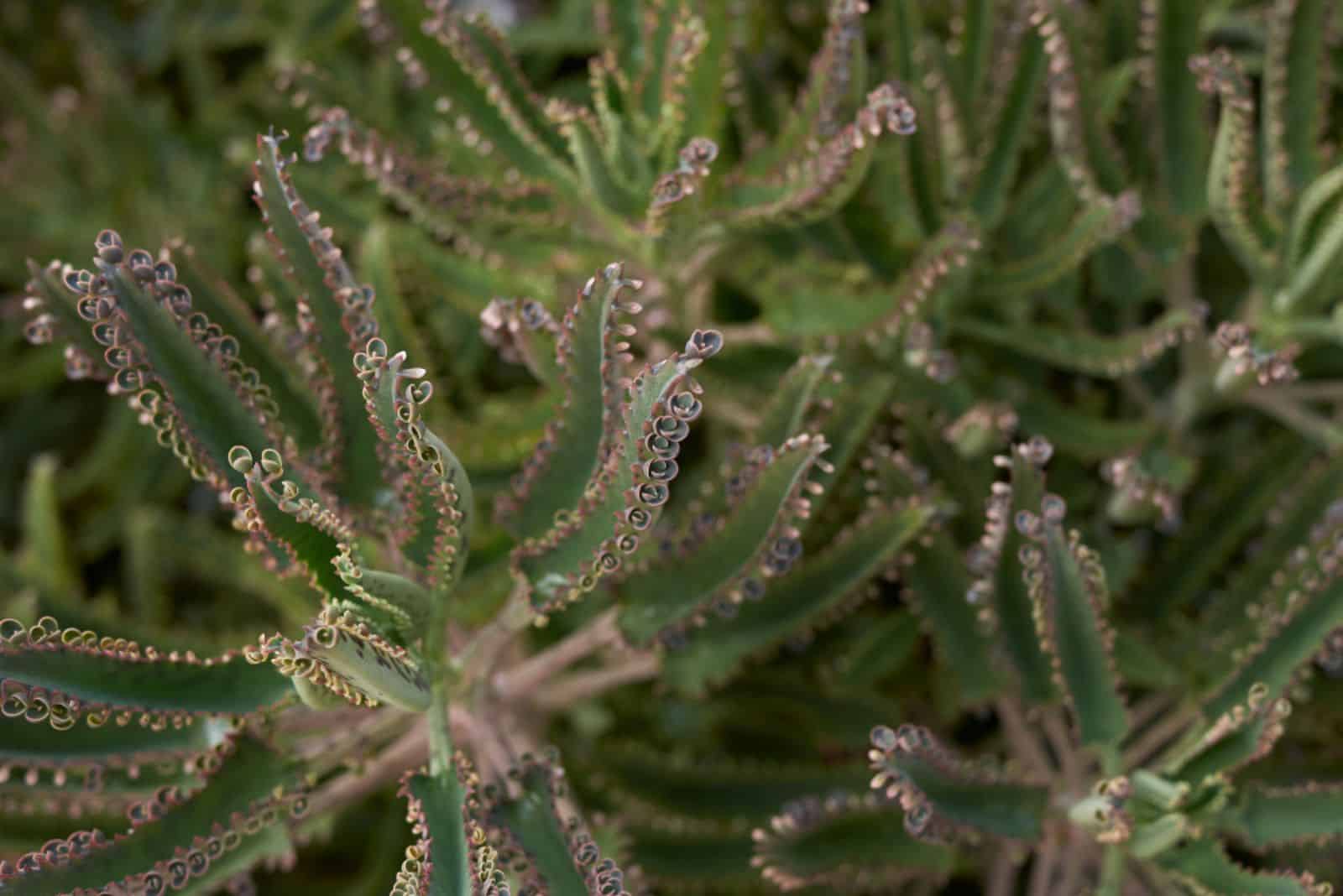 As you may assume, this Mother of thousands plant is a hybrid of two species, Daigremontiana and Delagoensis.

It is distinguishable by its V-shaped leaves. It is an upright, biennial plant that can grow to a height of 30 inches.

It features elongated, fleshy, green foliage with ruffled edges and purplish undersides. This Mother of thousands variety also generates plantlets on the edges of the leaves.

It quickly spreads by plantlets and seeds, so it’s invasive in some parts of the world. Given that the seeds can survive for several years in the soil, it appears to be indestructible and is incredibly challenging to eliminate. 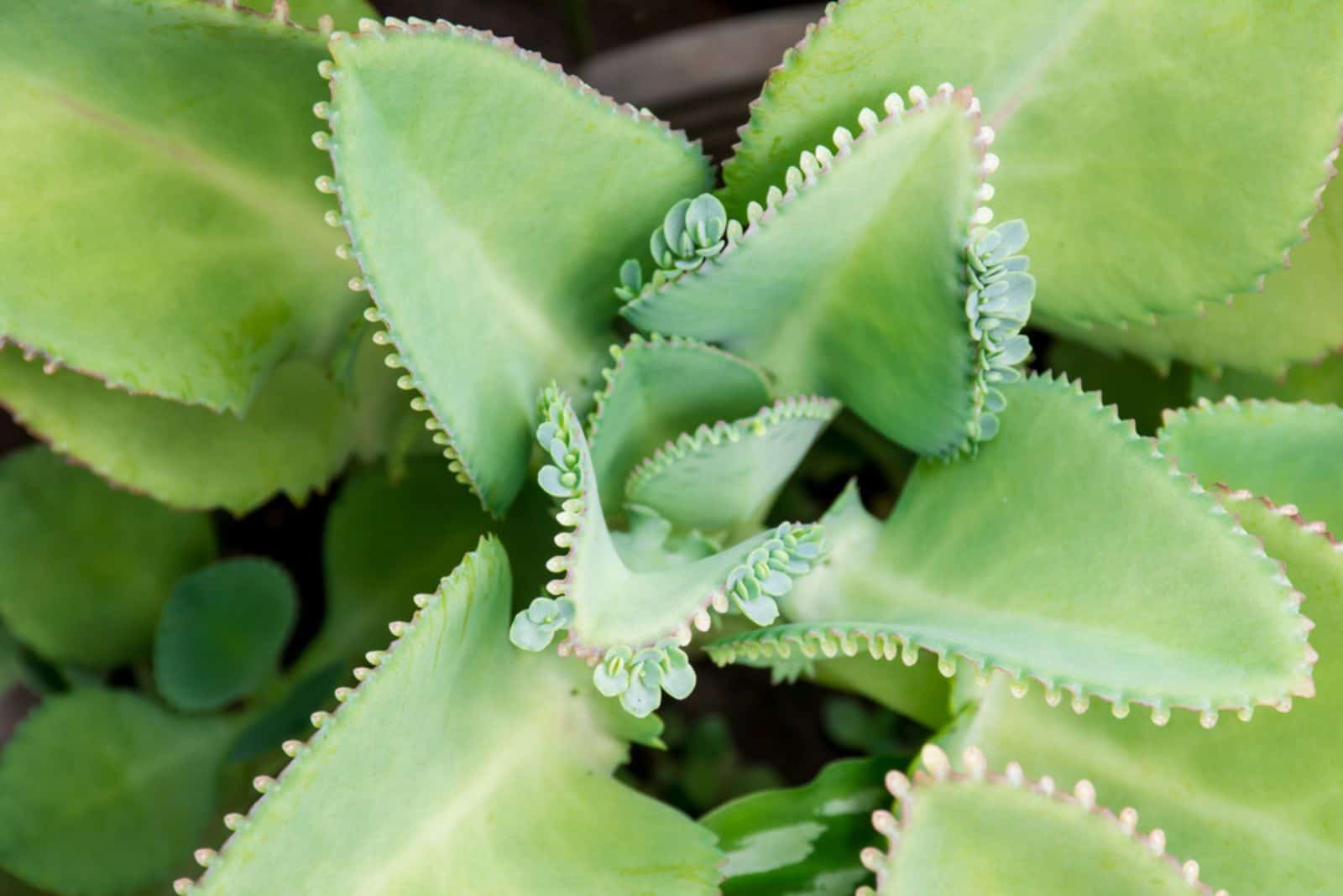 Interestingly, this Kalanchoe plant can reach about 6 feet tall, but only during blooming. Vegetative development only reaches a height of 19 inches.

The leaves are oval-shaped, have serrated edges, and may reach 7 inches long. The miracle leaf originates from Madagascar, but is cultivated all around the world.

Now let’s discuss the nicknames. Bryophyllum pinnatum is sometimes utilized as a remedy for respiratory conditions, and that’s why it got the nickname Miracle leaf.

The flowers of the Kalanchoe pinnata are bell-shaped and grow in clusters that hang downwards, hence the name Cathedral bells.

This plant was named after Johann Wolfgang von Goethe, who was not only a poet, but also a plant enthusiast. He cultivated the Kalanchoe pinnata in his garden and often gifted it to visitors.

When it comes to propagation, new plants are generated via plantlets; therefore, this Mother of thousands variety is also considered invasive in some regions. 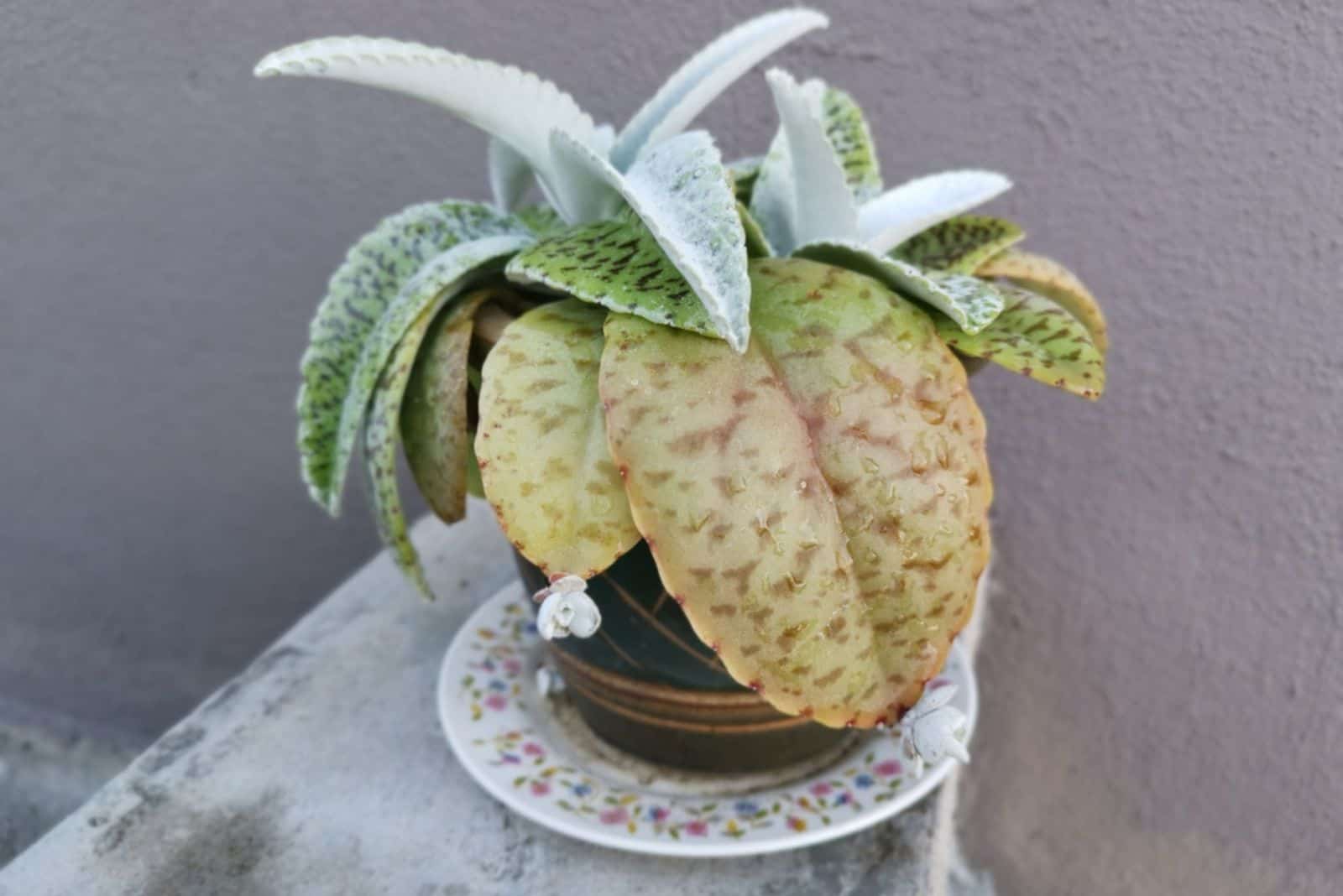 The Kalanchoe Gastonis-Bonnieri is another Mother of thousands plant, and is commonly known as Donkey ears, Sprout leaf plant, Palm beachbells, Good luck plant, and Tree of life plant.

It is native to rocky parts of northwest Madagascar, and reaches heights and widths of 12 to 18 inches. Its large, lobed leaves can measure up to 20 inches in length.

They’re deep green, but have a waxy white coating that makes them appear gray-green and blotched with brownish spots.

The mother plant dies after roughly two months of blossoming. Still, the numerous plantlets on the leaves continue to grow quickly and bloom after two to three years.

The plant’s scientific name is a tribute to Dr. Gaston Bonnier, a French botanist.

The Mother of thousands features a central stem that grows towards the light source. On the other hand, the Mother of millions has a couple of stems forming from the base of the plant into clusters that resemble bushes.

How to care for a Mother of thousands plant?

The Mother of thousands plant is perfect for beginners because it isn’t fussy about care requirements. This is a drought-tolerant species, but it’s not a desert plant and it will need water from time to time.

This Kalanchoe plant requires well-draining potting soil, so use pots with drainage holes and soil mixes with added perlite. You can also purchase a ready succulent mix to ensure better drainage.

This plant loves the direct sun, but I recommend not exposing it to intense afternoon sun to avoid sunburn.

The Mother of thousands requires repotting once it overgrows its pot. You can also take stem cuttings and propagate your Mexican hat plant when you are repotting. This plant reproduces via plantlets, so you’ll get many new plants without any effort.

The most common pests that affect the Mother of thousands are mealybugs and aphids. Rub the affected leaves with neem oil or apply insecticidal soap.

Be careful when handling the plant due to its toxicity. Although the plant is sometimes used for medicinal purposes, its toxic to stock, and ingestion may cause severe issues.

Many growers suggest Mother of thousands succulent plants to beginners as they’re super easy to maintain.

These plants also look amazing and will make any room prettier.

You can choose between many Mother of thousands varieties; each one is equally beautiful.

Don’t worry if you forget to water your Kalanchoe plant; it will still thrive with a little bit of neglect. 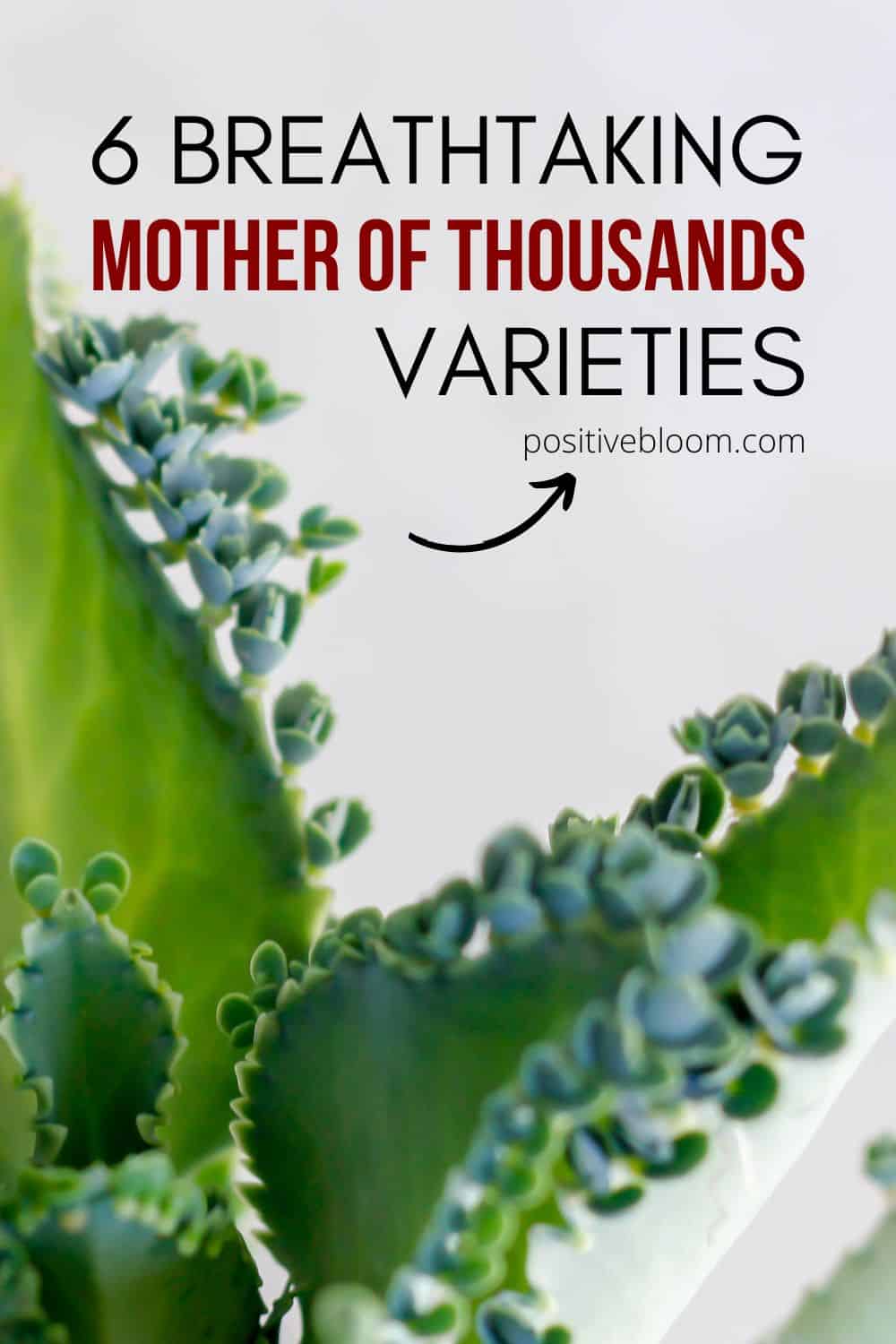