As well as the decorative purposes of growing plants indoors, people often grow certain plants because of their special meanings. For instance, the meaning of black orchids is associated with power, authority, and luxury, which is why the elite class frequently buys them.

A similar thing goes for the Chocolate cosmos flower!

This plant was discovered in the 16th century in Mexico, and since then it has become part of many cultures and religions, which is why it is one of the most popular flowers today.

So, if you are interested in learning more about the chocolate cosmos meaning, keep reading! 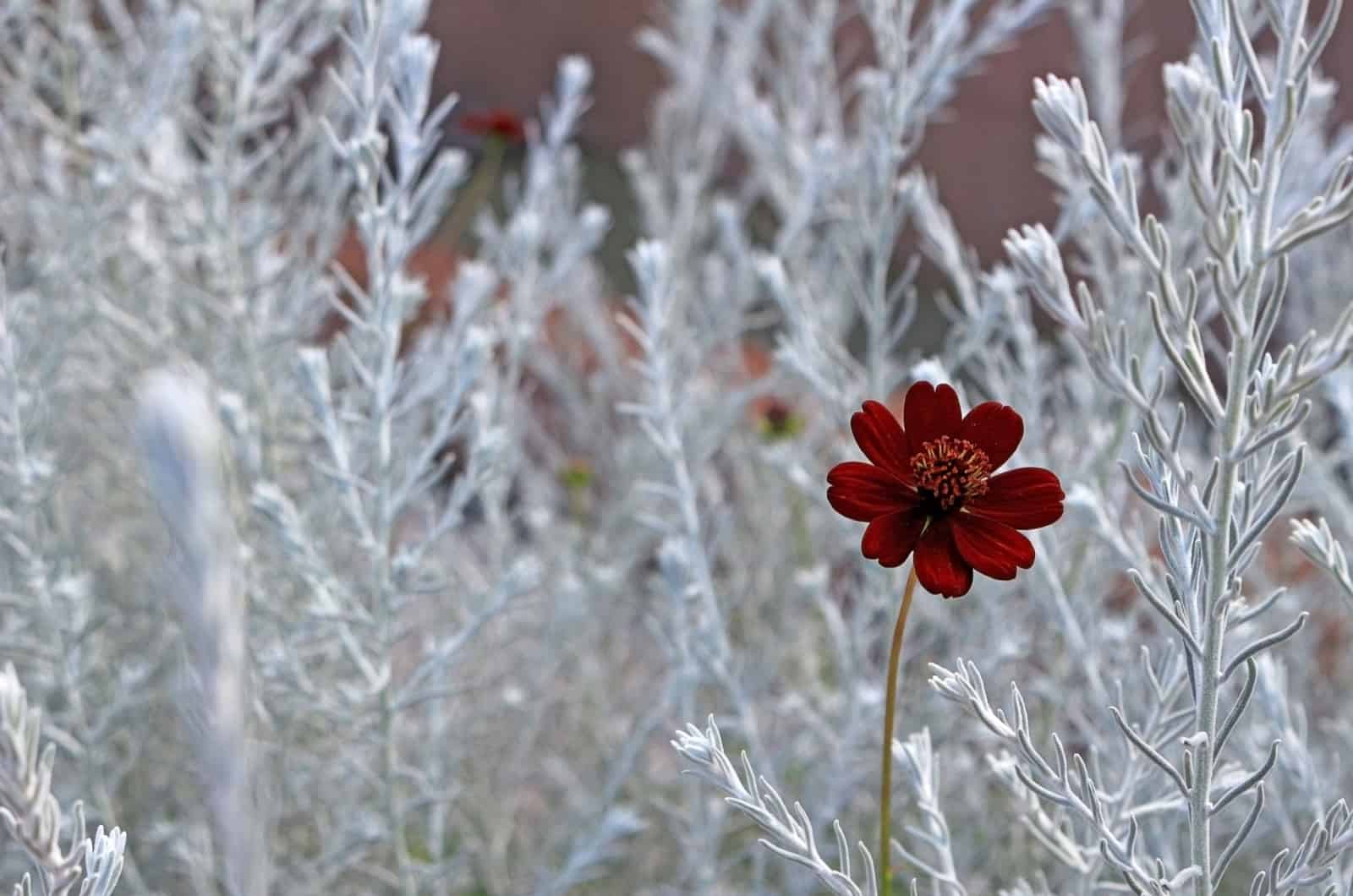 The Chocolate cosmos, otherwise known as Cosmos atrosanguineus, is a herbaceous plant that produces a beautiful flower. It consists of a central disc floret surrounded by ray florets. They have a strong fragrance that is similar to chocolate, which is how they got the name, although they also have a dark-brown color.

But be careful, though, because this plant is not edible!

Though these are perennial plants, in colder regions they are grown as annuals. They need well-drained soil and full sun to thrive. Cosmos plants can grow about 23 inches tall, and have long, fleshy tuberous roots protruding in the soil.

Cosmos flowers were discovered by Spanish explorers in the 16th century in Mexico, and they brought them back to Spain. They arrived in England in the latter half of the 18th century, but also in South Africa during the Second Boer War.

The name “cosmos” was first given by Spanish priests, who frequently cultivated the blooms and were entranced by the exquisite and orderly arrangement of petals.

The chocolate cultivar became popular in the 19th century, when it was used as a symbol of the World kindness movement.

Chocolate cosmos flowers are commonly seen in gardens across America, but the Cosmos bipinnatus is the most cultivated cosmos variety. One of the main sources of yellow dye in Central and South America was the yellow cosmos flower. 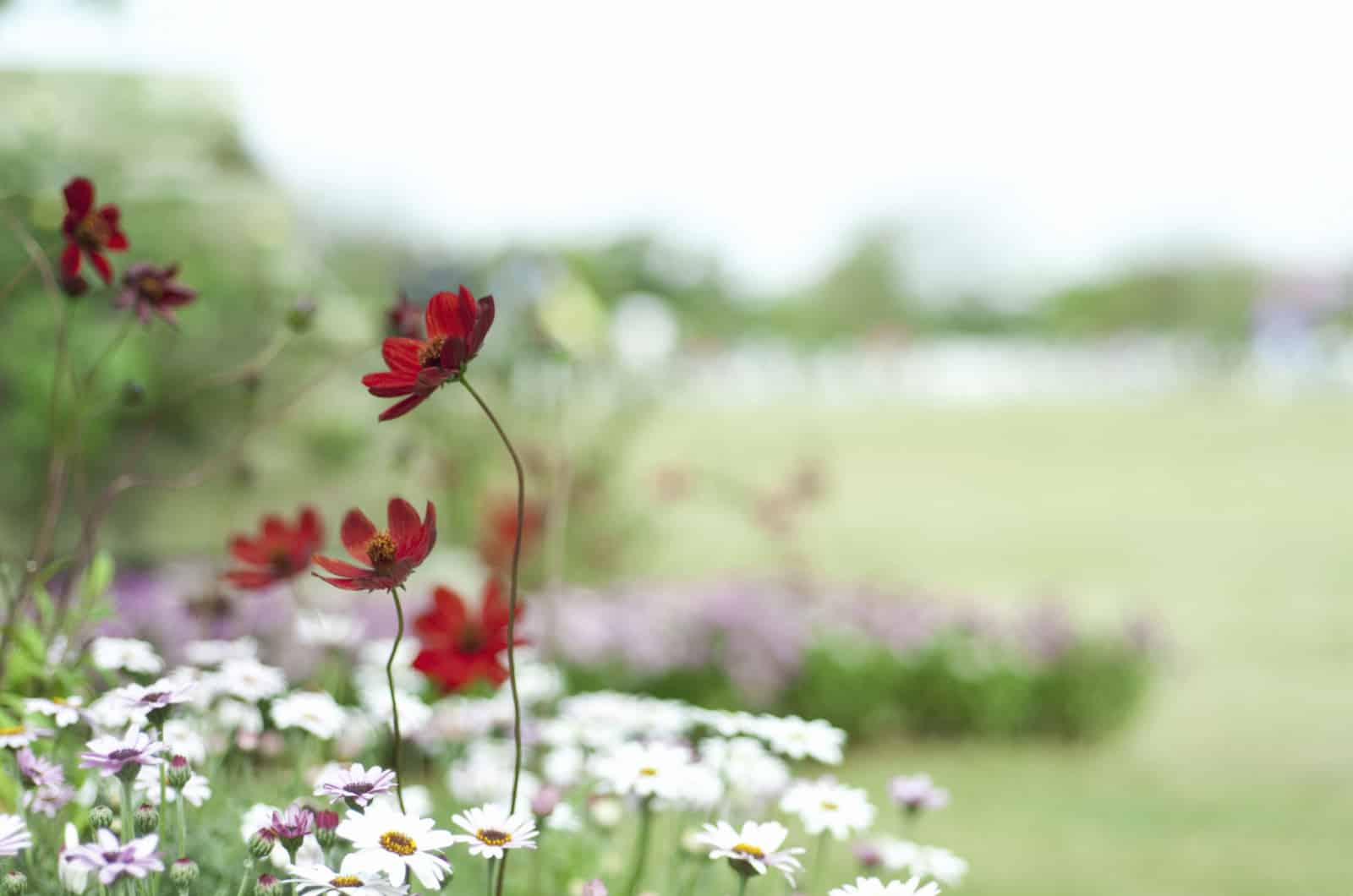 These lovely flowers got their name from the Greek word “kosmos”, which actually means the universe’s harmony and order. Today they are widely popular, which means that cosmos flower meanings differ in many cultures.

Let’s travel back in time to the Victorian era. The cosmos flower was a representation of love in Victorian England, when flowers held immense symbolic value.

In Japanese culture, cosmos flowers are typically offered to girls who are about to enter puberty because this lovely flower is a symbol of purity and innocence.

Although there are many uses for the cosmos flower in Brazilian culture, it has no unique significance. It has been used to treat malaria and is recognized for its anti-inflammatory qualities.

Diabetes can also be treated using the flower. Quercetin is also included in flowers, so many people utilize it to treat skin issues.

The lovely cosmos flower has historical significance in Chinese culture as well. Many Chinese people give cosmos flowers as gifts to express love and beauty, as well as innocence and purity.

You’ll notice the flowers at the end of the summer if you plant any type of cosmos flower. Because of this, the flower has come to represent hope and rebirth to Americans.

In Mexican culture, these flowers are related to gods and spirits. Though all species of cosmos are found in Mexico, the most common one is the Chocolate cosmos, which actually represents perfect harmony and order.

Contrary to popular belief, Greek mythology has nothing to do with the cosmos flower. Although the word is Greek in origin, there is no relation to the mythology. The cultural significance of this flower is that it stands for coexistence with nature.

Chocolate cosmos flowers were once one of the rarest flowers in the world, but they’ve gained in popularity over time. Their propagation is also easy — they grow from tubers that allow division.

However, they are not self-pollinating flowers, which is why they are almost extinct in the wilderness.

So, let’s track back to the Chocolate cosmos flower meaning.

First, this flower is associated with communication, passion, desire, and pure love. Its cut flowers are used to make lovely bouquets that you can gift to loved ones on Valentine’s day instead of roses. So, if you are having trouble expressing your emotions, then these lovely flowers will say “I love you” perfectly.

As well as being a symbol of beauty and pure love, they are also considered to be a sign of survival because they can grow in harsh conditions.

You can also send happy wishes and good luck to all of your friends that are born in October because this is the period when chocolate cosmos flowers thrive the most. 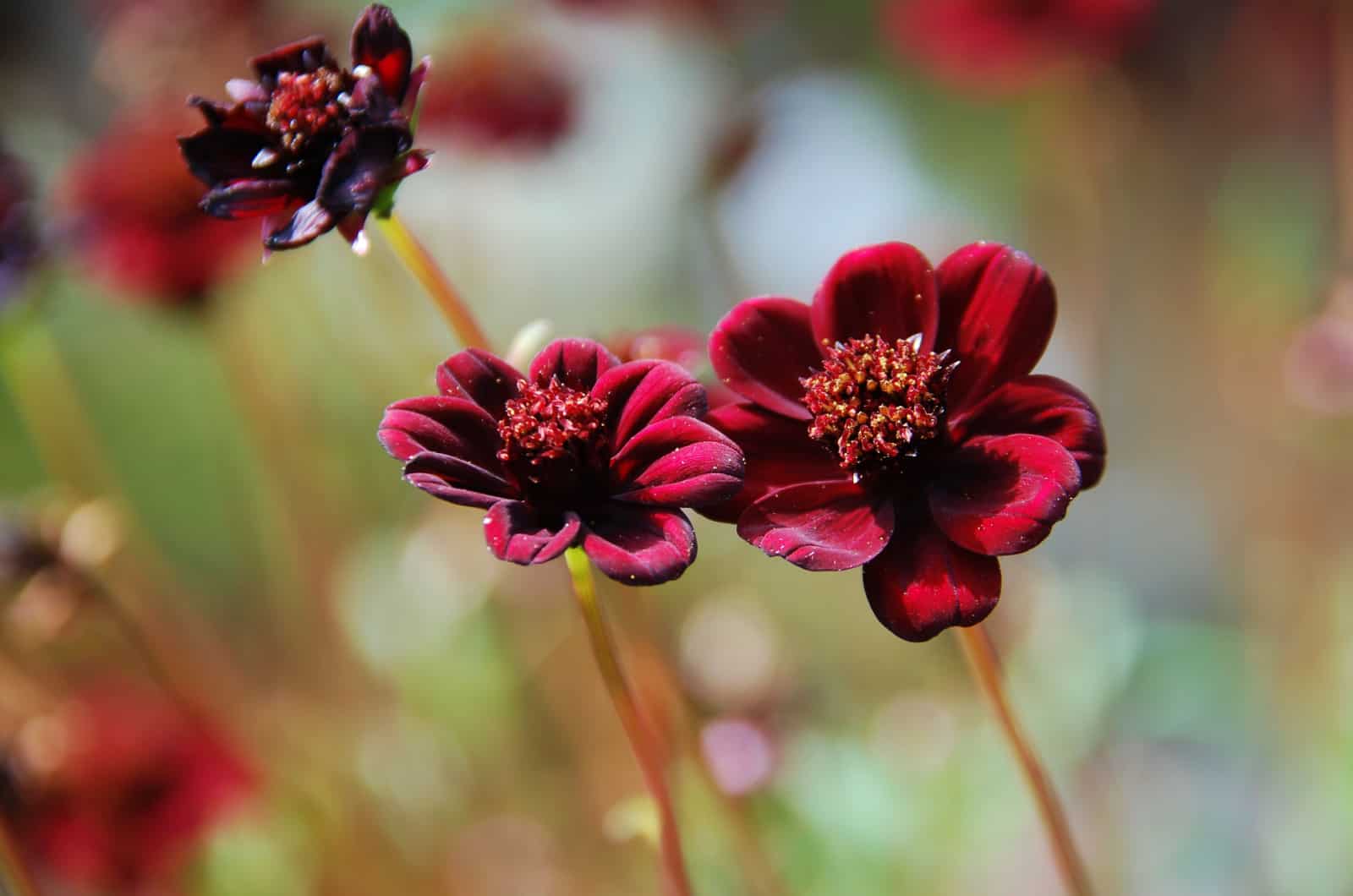 The cosmos flower has been connected to both the throat chakra and sacred geometry, which is why public speakers regularly use it to improve their speaking voice. Herbalists use cosmos flowers extensively as they have a variety of therapeutic uses. Mexicans also utilize it to cure diabetes, skin conditions, and malaria.

These flowers might also improve blood flow and strengthen our bones.

It’s interesting to note that the cosmos flower has culinary applications; it is usually included in king’s salad, a meal that combines a number of therapeutic herbs.

Growing these flowers in gardens is a great idea because they attract helpful insects and pollinators if you are practicing companion gardening.

Numerous cosmos variants have been created specifically to be used as ornamental plants in bouquets and gardens. They are a fantastic choice for cottage gardens and can grow practically anywhere. Cut cosmos flowers have a five-day shelf life. 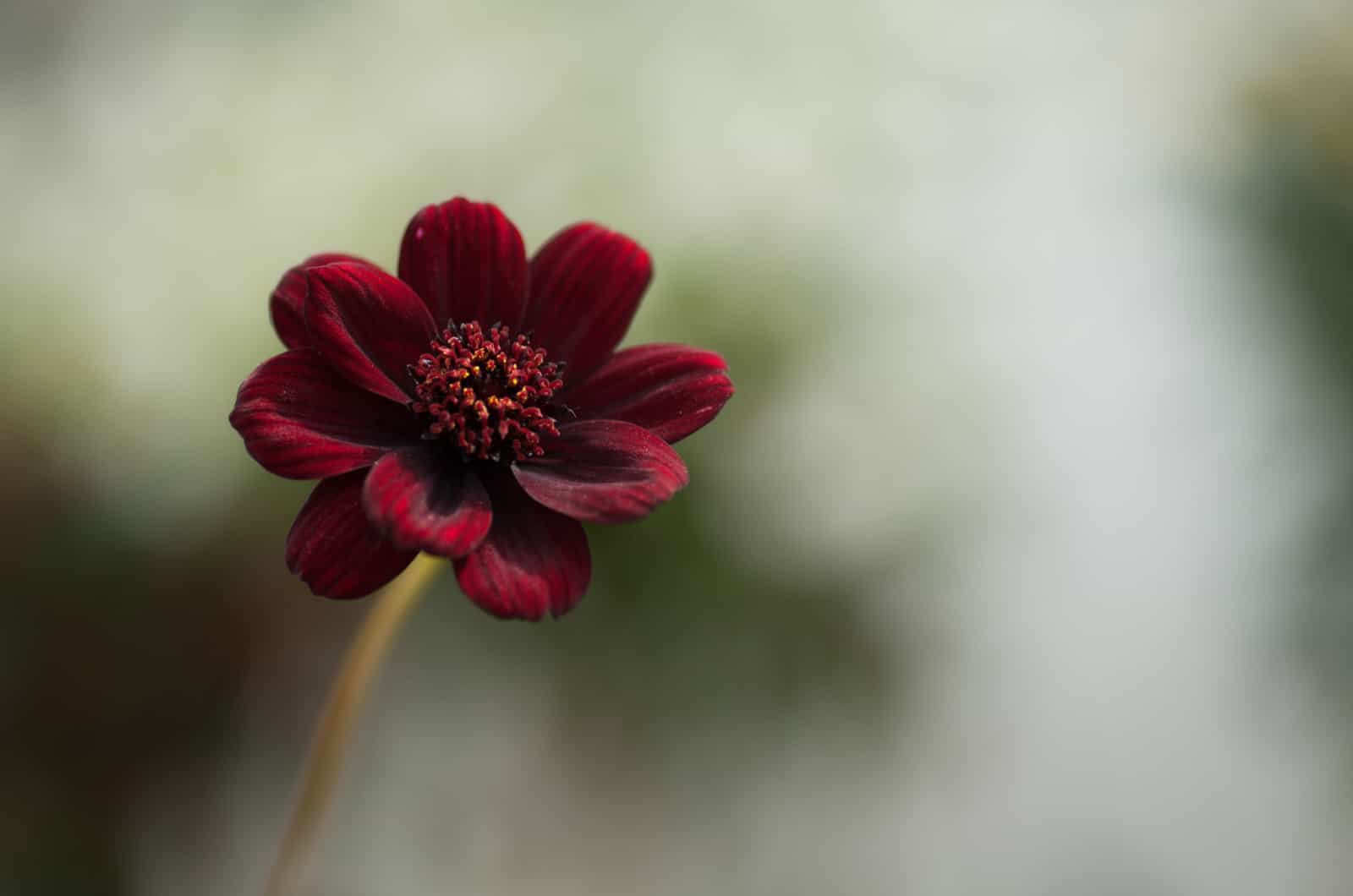 Now that you know the Chocolate cosmos meaning, I’m sure that you’ll want to grow some of your own to gift these lovely flowers to someone special!

However, make sure that you say what the true meaning behind your gift is, especially if you are having trouble communicating your emotions.

I hope this article was helpful. 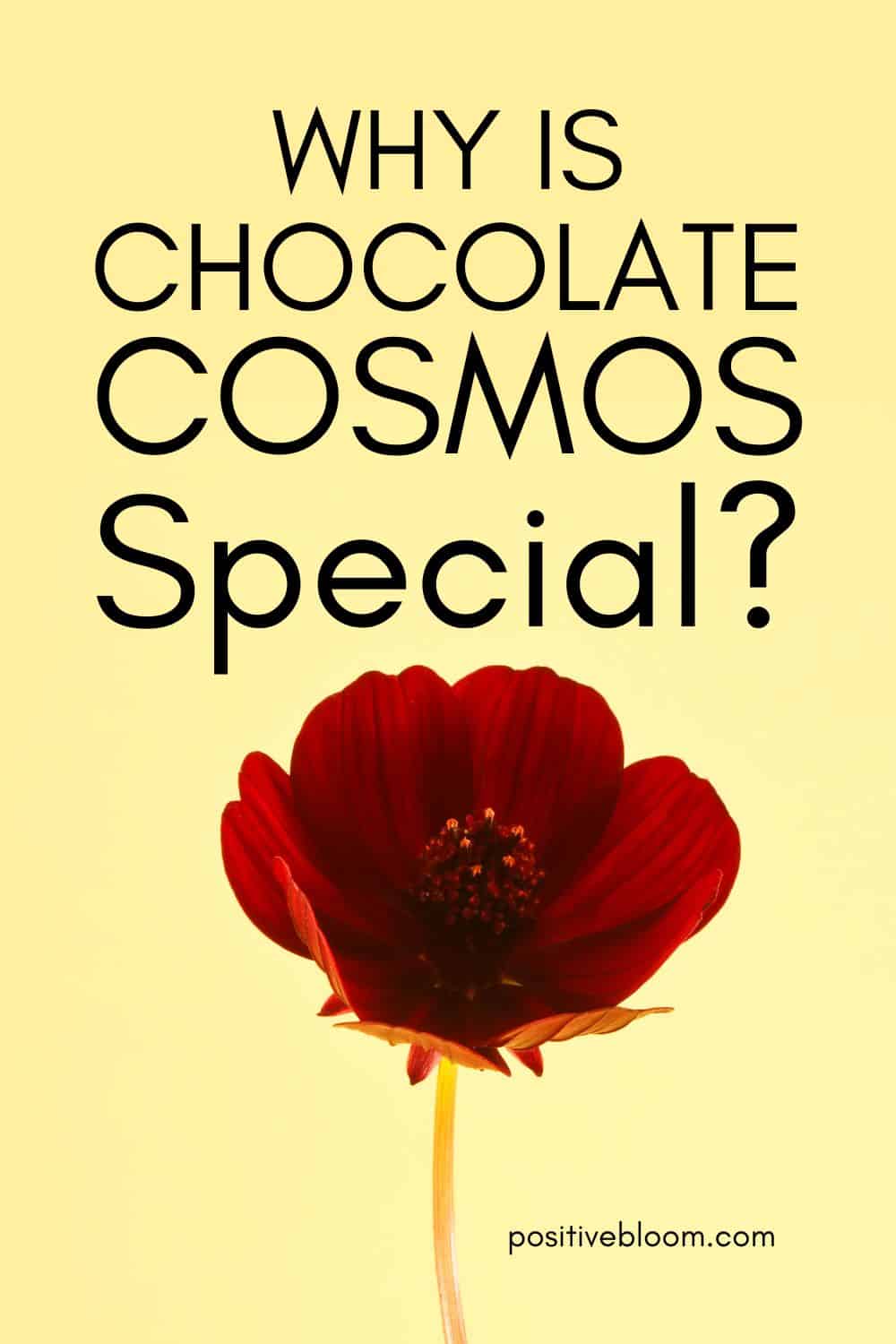